Ukrainian troops will beat their Russian counterparts and the country will “be free” from occupation, Boris Johnson has told Ukraine’s parliament – adding that it is a fight of “good versus evil”.

In a recorded address, he also told the Verkhovna Rada that the “so-called irresistible force of Putin’s war machine has broken on the immoveable object of Ukrainian patriotism”.

The war has exposed Putin’s “historic folly” – the “gigantic error that only an autocrat can make”, Mr Johnson said.

“When a leader rules by fear, rigs elections, jails critics, gags the media, and listens just to sycophants –
when there is no limit on his power – that is when he makes catastrophic mistakes,” the PM commented.

A “free media, the rule of law, free elections and robust parliaments, such as your own” are the “best protections against the perils of arbitrary power”, Mr Johnson went on.

What Vladimir Putin has done is an “advertisement for democracy”, the PM said, and the “carcasses of Russian armour littering your fields and streets” are “monuments to his folly”.

The conflict is Ukraine’s “finest hour”, the prime minister said.

“Your children and grandchildren will say that Ukrainians taught the world that the brute force of an aggressor counts for nothing against the moral force of a people determined to be free,” he said. 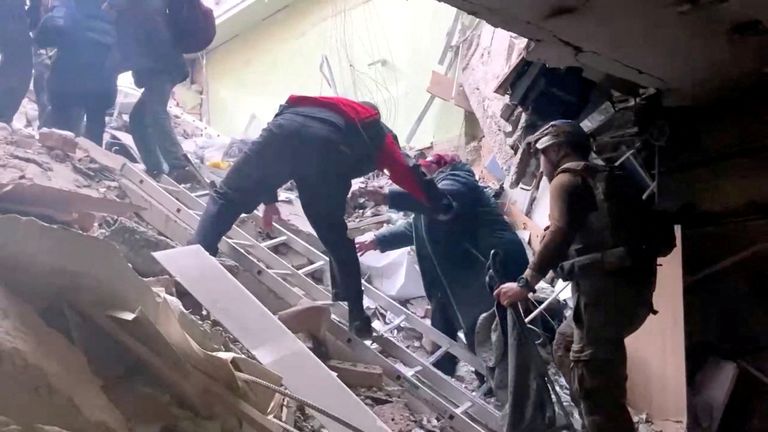 A further £300m of UK military aid has been announced as Ukraine continues to fight back against the Russian invasion.

In the bombarded city of Mariupol, it is hoped more people can be evacuated from the Azovstal steelworks on Tuesday.

More than 100, including elderly women and mothers with small children, got out of the rubble-strewn site over the weekend.

Around 200 remain inside, however. Aid workers have prepared hot food, wheelchairs and toys for those able to make their way to safety.