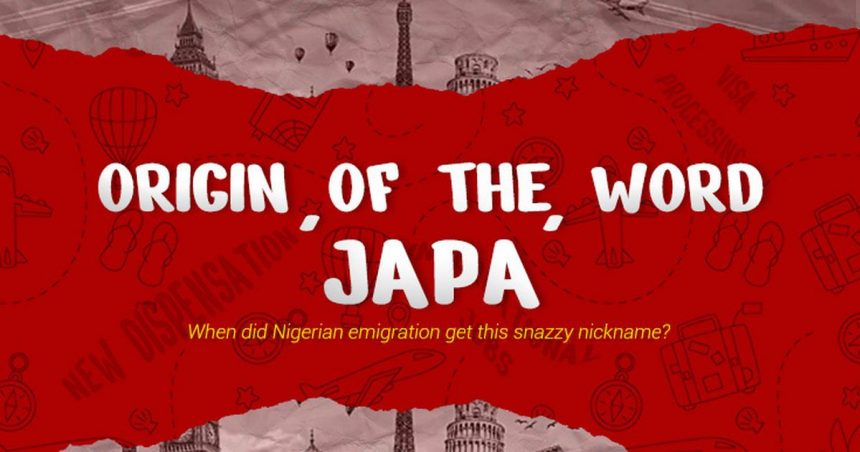 But none of these past emigration campaigns and periods has been as significant, or as documented as what is ongoing right now. It’s 2022 and Nigerians are getting out in droves. Now that it coincides nicely with an age of mass information being dumped on the internet, it only makes sense that emigration stories are being shared in real-time, going viral and becoming more of a spectacle than it has ever been for previous generations.

The implication of this is that everyone knows about it, everyone follows it and everyone seems to have an idea of how it’s shaping up.

But while emigration remains an age-long reality and ever-present aspiration for many Nigerians, no word has been more interwoven with the idea than ‘japa,’ the recent social media speak that has permeated pop culture and all other facets of Nigerian life. All conversations surrounding travel and emigration out of Nigeria are now interwoven with the word.

But how and when did emigrating from Nigeria get this snazzy new word coined for it?

Simply put, it is a Yoruba word that means ‘flee.’ The etymology of the word involves ‘ja’ which means to break loose and ‘pa,’ which, in this context, refers to the intensity or severity of an action.

The exact period when this switch occurred cannot be ascertained with bull’s eye accuracy; but the first popularized, pop-culture use of the word can be traced to Naira Marley’s 2018 song “Japa.”

In the song, the singer narrates a story of weaving and turning at high speed, in a bid to evade policemen who are giving chase. The part of the song most instrumental to this piece is where he sings:

In those lines, he’s singing about japa’ing [fleeing] to London, Canada, Chicago and Africa.

This song didn’t do badly; just like most of Naira Marley’s other songs of the time. Mind you, this was after ‘Issa Goal’, and Naira was already well-known and somewhat adored. The British-Nigerian rapper was even nearing his beast mode where all his songs were monster hits propelled by his constant issues with Nigerian authorities.

So, the song ‘Japa’ was well-received and somehow, the slang it carried slowly bled into social media conversations, especially as it relates to escaping the deteriorating conditions of Muhammadu Buhari’s Nigeria.

Maybe the song had nothing to do with it, but japa in this context wasn’t much of a thing, if at all, before that song.

This was 2018, mind you, when the Naira was 361 to the Dollar. Sure, things are waaaay worse now as Buhari readies to check out of Aso Rock but at the time, no hardship was comparable and of course, there was an exodus. The exit of that period slowly imbibed the moniker ‘Japa.’

By 2019, it was already an established thing on social media to refer to emigration as ‘japa-ing’ out of the country.

Now, it is not only established but has become wildly popular that almost all conversations on emigration – not just on social media – are now centered around the word.

The future of japa in Nigeria

To think that much will change, from all indications, seems like a pipe dream. With the country deteriorating quickly in key areas like economy and security, emigration seems primed to keep being an aspiration, a dream, a prayer point in churches and other religious bodies that Nigerians throng to. As a matter of fact, one out of three Nigerians has considered travelling out of the country for good.

Only if wishes were horses…