Emmanuel Macron will become the first French president in 20 years to win a second term after an official vote projection suggested he has seen off the challenge from Marine Le Pen.

The projected result from Ipsos saw Mr Macron get 58.5% of the votes compared with Ms Le Pen’s 41.5%.

The margin is expected to be way smaller this time: Polling agencies Opinionway, Harris and Ifop projected that Macron would win between 57% and 58.5% of the vote, with Ms Le Pen getting between 41.5% and 43%.

Cheers erupted at the foot of the Eiffel Tower where supporters of the president celebrated his re-election.

And in his victory speech, Mr Macron said he will be “president for all of us” in France.

“Many of our compatriots voted for me not out of support for my ideas but to block those of the extreme right.

“I want to thank them and I know that I have a duty towards them in the years to come.”

Boos and whistles broke out at the campaign party of his challenger before she conceded defeat.

“Tonight’s result is in itself an earth-shattering victory (for us),” she told her supporters.

“I fear that the five-year term that is about to begin will not break with the brutal methods of the previous one.

“In order to avoid the monopolisation of power by a few, more than ever I will pursue my commitment to France and the French people with the energy, perseverance and affection that you know me for.”

Sky’s Ali Fortescue described the mood in the Le Pen camp as “subdued” with many fearing this was her last chance to become president. 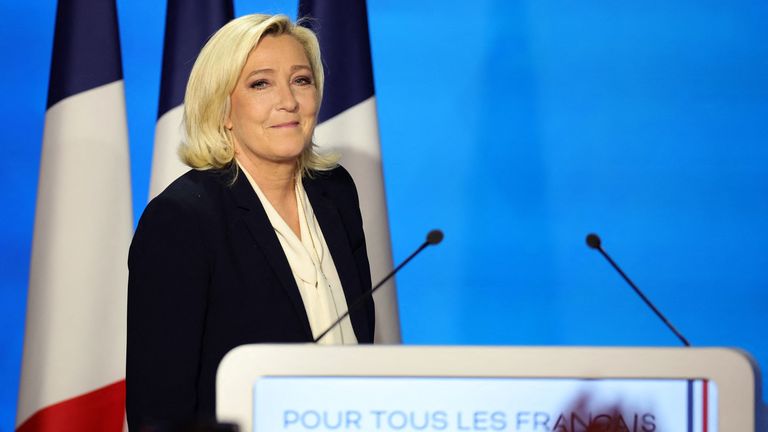 European Council President Charles Michel, as well as the prime ministers of Belgium and Luxembourg, were among the first European leaders to congratulate Mr Macron.

“In this turbulent period, we need a solid Europe and a France totally committed to a more sovereign and more strategic European Union.”

German Chancellor Olaf Scholz tweeted: “Your constituents also sent a strong commitment to Europe
today. I am pleased that we will continue our good cooperation!”

UK Prime Minister Boris Johnson tweeted: “Congratulations to @EmmanuelMacron on your re-election as President of France.

“France is one of our closest and most important allies. I look forward to continuing to work together on the issues which matter most to our two countries and to the world.”

Macron’s victory will be greeted with sighs of relief

Emmanuel Macron’s defeat would have led to a seismic shift in world affairs.

His rival Marine Le Pen would have set France on a collision course with the EU and changed the axis of power in Europe. She even wanted to restore France’s alliance with Russia once the Ukraine conflict was over.

Macron’s victory means the status quo of the last five years goes on. France and Germany remain the spine of Europe and the French president is likely to continue trying to take a prominent role leading Europe diplomatically.

The next hurdle is only a few weeks ahead.

Parliamentary elections in June will define the make-up of the government Mr Macron must rely on to see through reform plans that would be an unprecedented shake-up of France’s welfare state.

Newly elected presidents can usually expect to get a majority in parliament whenever legislative elections directly
follow the presidential vote because of the generally low turnout among supporters of all the defeated candidates.