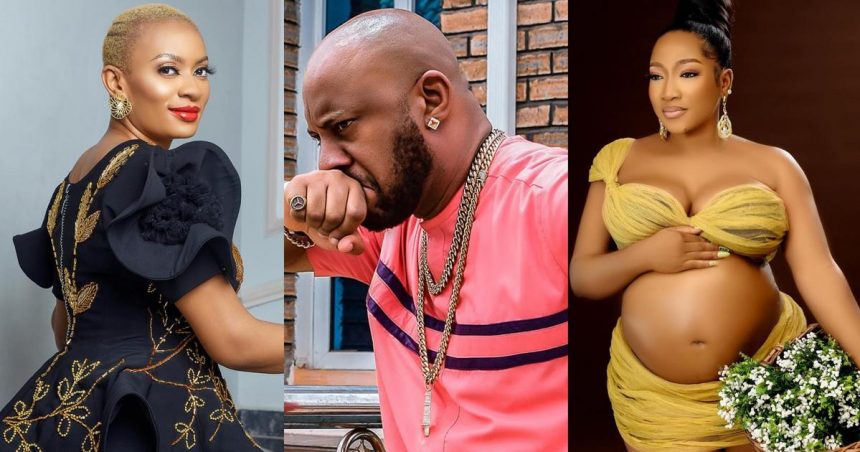 Despite colonialism, the cultural nature of polygamy has not left the heart of Nigerian men (and women), we might as well be living a lie if we believe that Nigeria is a monogamous society. Islamic marriages are under the traditional marriages according to the law and it prescribes for four wives, traditional marriages allow for an infinite number of wives.

As a digression, there is an old video of his father, Pete Edochie advising women. He said when a man goes out to cheat, the woman should put condoms in his bag and not nag him. Some people supported him and said Pete grew up and lived in a different time socially and culturally. In hindsight, Yul probably took his father’s opinions to heart.

Yul’s actions aren’t new in Nigeria and shouldn’t have caused the uproar that it did because in Nigeria the lines of right and wrong are repeatedly blurred with so many intersections of culture and religion.

Some Christians even argue that having another wife or cheating while married is not a bad thing. Some people say the Jewish religion is polygamous, but Christianity isn’t because whenever the new testament bible referred to marriage, it was always a man and his wife and wives.

The common and usual act in Nigeria is infidelity, the uncommon thing is finding a faithful partner to spend the rest of your life with. Even people who decry cheating online are lusting and pursuing different romantic interests apart from their partners. If we want marriages to be polygamous, then from the get-go it should be stated instead of betraying the trust of our partners.

Nigerian men are patently dissatisfied with their partners because Nigeria embraces some sort of semi-polygamous society. The men are not the only ones known for blatantly flaunting their marital vows, Nigerian women are not saints, the rate of paternity fraud is just enough evidence. According to Wikipedia, “DNA expert from Lagos University Teaching Hospital claimed that 30% of the Nigerian men who went to paternity testing centers (paternity testing laboratories) were not the biological fathers of the children in their custody.”

The truth is in Nigeria, almost everybody is scum and toxic. The role of side pieces or the other men and women who married people cheat with cannot be discountenanced. It can be argued that they have no responsibility to the couple since they did not make the same vows, but they are veritable accomplices in ruining monogamy. Some women and even men in search of a rich man (or woman) will ignore the fact that the person is married. In short, married people are their spec because they are already established.

Yul’s second wife is happy about their union, she commented on his first wife’s picture Yul posted with glee.

At the end of the day, majority of Nigerians practise hypergamy, polyandry and polygamy and not monogamy.

Yul is satisfied with having two wives but interesting, bigamy is a crime in Nigeria and he cannot legally marry another wife under Nigerian law. Even if he chooses to marry his new wife under customary law, it is a void marriage, because he is already married under the Act or statutory law.

A statutory marriage, otherwise called the monogamous marriage is defined by section 3 of the Criminal code as a marriage recognised by the law of the place where it is contracted as the voluntary union, for life, of one man and one woman to the exclusion of others. A marriage contracted under the statute prohibits either of the spouses to conduct another wedding with any other person during the continuance of such statutory marriage.

Section 33(1), 35, and 47 of the Marriage Act also speak on the illegality of bigamy. These sections provide as follows:

If you want your affairs to be conducted by customary law, then do not get married under the Act. Section 35 of the Marriage Act provides that, “Any person who is married under this Act, or whose marriage is declared by this Act to be valid, shall be incapable, during the continuance of such marriage, of contracting a valid marriage under Customary law; but, save as aforesaid, nothing in this Act contained shall affect the validity of any marriage contracted under or in accordance with any customary law, or in any manner apply to marriages so contracted.

Section 47 of the Marriage Act then prescribes the penalty where the above is breached. “whoever, having contracted marriage under this Act, or any modification or re-enactment thereof, or under any enactment repealed by this Act during the continuance of such marriage (and)contracts a marriage in accordance with customary law shall be liable to imprisonment for five years”.

Bigamy is an example of bad law in Nigeria because no one cares about it nor are offenders prosecuted.

At the rate things are going, we might have to scrap monogamous marriages since both parties cannot stick to the agreement.