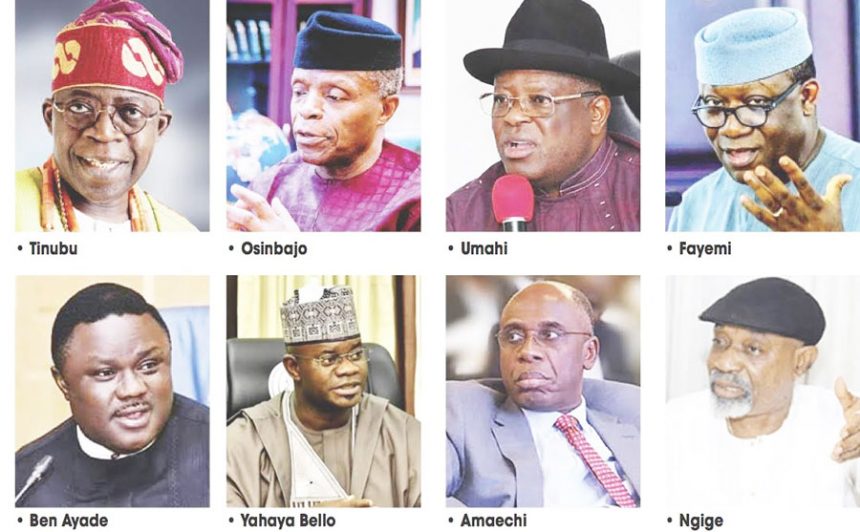 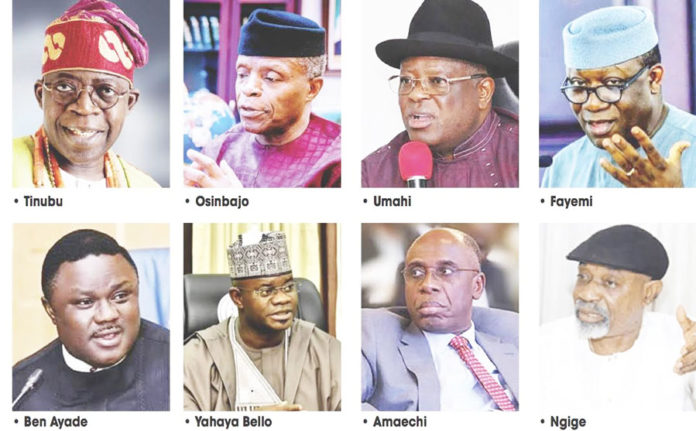 The rising number of presidential aspirants in All Progressives Congress, which is unprecedented in the history of any ruling party in Nigeria, has raised grave concerns on the real motives of these aspirants and the capacity of the party to manage its success, Ejiofor Alike reports

As President Muhammadu Buhari winds up his eight-year tenure in 2023, the race for his successor appears to have become an all-comers’ affair in the All Progressives Congress (APC) as the list of the presidential aspirants grows daily despite the exorbitant cost of the party’s presidential nomination forms.

At the last count, APC has over 20 aspirants jostling to succeed Buhari and the list is still growing.

Senate President, Dr. Ahmad Lawan; and Jigawa State governor, Mr. Muhammad Badaru Abubakar, have also indicated interests. Lawan was said to have obtained the N100 million presidential forms. Minister of State for Petroleum, Mr. Timipre Sylva and former President Goodluck Jonathan are also said to be considering to join the race any moment before the expiration of the deadline.

The unsettling number of aspirants jostling to take over from Buhari has raised grave concerns on the real motives of these aspirants. While some analysts believe that some of these aspirants are in the race to truncate the likely chances of others, many analysts also argue that some want to use their presidential aspirations to negotiate for other positions so as to remain relevant after 2023.

But most importantly, many are concerned that the large number of aspirants is an indication of the ruling party’s failure to manage its success.

One of the frontline aspirants and APC’s National Leader, Tinubu had described the rising number of aspirants vying for the party’s presidential ticket as a plus for Nigeria’s democracy. Reacting to the rising number of aspirants  after a meeting with Buhari on Tuesday, the former Lagos State governor said: “The more the merrier. The more they come, the more challenging it becomes for you to think deeply, focus on issues and be ready to serve Nigeria. It’s all about service; it’s nothing else. Think wisely, get committed to your thinking to serve the nation and bring progress and prosperity to the lives of Nigerians.

“It’s good for the country for so many of us to aspire to want to lead; we are not abandoning our nation. But there’s only one chair and one possibility. We will do that,” Tinubu explained.

However, many believed that the former Lagos State governor was being economical with the truth because as an experienced politician, he knows that allowing such number of people to go into the field of contest can destroy the ruling party. Tinubu, who was the first to declare interest, was earlier said to have felt betrayed by some of those who had indicated interests to challenge him in the race.

Some political analysts have hinted that the failure of APC to streamline the number of contestants like the previous ruling parties in the country would lead to rancorous presidential primary and protracted litigations, which could mar the chances of the party in the 2023 general election. Even the elders and leaders of southern Nigeria have raised concern that the high number of aspirants from the southern part of the country could divide the southern delegates and give the North an advantage in the APC primary. This fear is further fuelled by the fact that the ruling party has refused to expressly zone the ticket to the South. President Buhari may have used his technical endorsements of almost all the aspirants to boost his democratic credentials but that was a recipe for crisis in the ruling party.

Most of the aspirants had approached Buhari to notify him of their intentions before declaring openly, but they surprisingly received the same presidential go-ahead. Members of the same political party are supposed to have common interest and the same ideology. The interest of the party should subsume the personal interests of the members. So, a disciplined political party should have the capacity to rein in their over-ambitious members to drop their ambitions for the common interest of the party members. That was how the defunct National Party of Nigeria (NPN) and the Peoples Democratic Party (PDP) managed their successes as ruling parties.

Perhaps, in an attempt to discourage potential aspirants, the ruling party had hiked the cost of expression of interest and nomination forms for the presidential aspirants to a whopping sum of N100 million. But this hike did not discourage the motley crowd of aspirants. However, all hope is not lost.

Cross River State governor, Ayade had after purchasing the forms, declared that he would not mind stepping down once the president and the party urged him to so do. Amaechi had also pledged to support the choice of Buhari and the APC. Forms to be filled by aspirants seeking to withdraw voluntarily are also circulating on the internet. President Buhari and the APC should intervene urgently to streamline the number of contestants to facilitate the emergence of a consensus candidate. Any aspirant who loves the party should be ready to drop his personal ambition and abide by the party’s decision. Any presidential aspirant who insists that this motley crowd should go to the field to test their popularity is selfish and does not mean well for the ruling party.

Unlike the PDP, which has zoning in its constitution to promote justice and fair play, APC does not entrench this principle in its constitution. But the coalition of political parties that formed APC had what has come to be known as ‘gentleman’s agreement’ to rotate power after Buhari’s eight-year tenure. For the sake of justice, the consensus candidate should emerge from the South.

However, the spirit of zoning and rotation will be defeated if a consensus candidate emerges from any geo-political zone in the South, which has produced the president since 1999. If the North is being discouraged from fielding candidates because of Buhari’s eight-year tenure, any southern geo-political zone, which has produced the president since 1999 should also be discouraged from vying for consensus candidate. This will deepen justice and fair play, which the principles of rotation and zoning seek to promote.