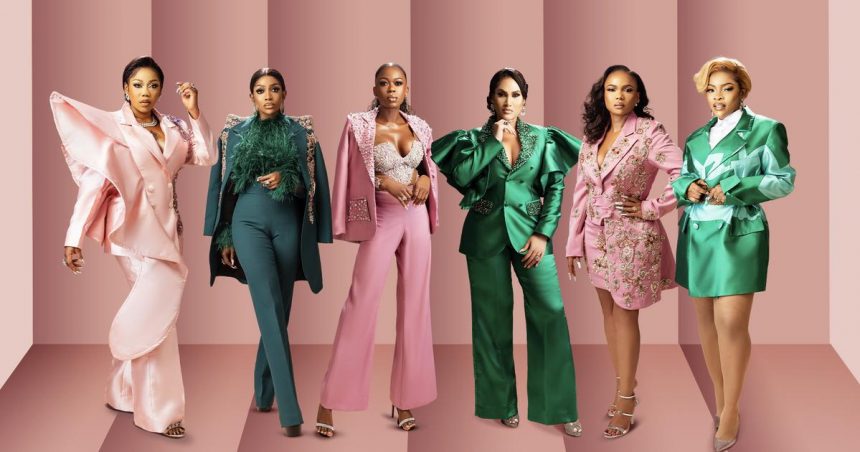 So far, there has been three episodes with a new one dropping on Friday. A lot can be said about the theatrics and drama of the show, but we will like to focus on the fashion and style of these ladies.

We speculate that their styling, hair and makeup budget must be huge. Also, they could be styling themselves or a team is responsible for it.

In the first episode, the ladies gathered for Tiannah’s (Toyin Lawani) baby shower. Everyone looked simple and casual, just for the event – you know, it is a baby shower. Tiannah was positively glowing in a white trench coat and gown with golden appliques – trust her to never keep it entirely simple.

Laura Ikeji was fashionably late and she wore a white suit, mini-skirt and jacket. She looked great too and she walked in with that confidence.

Caroline Hutchings also came in late for the baby shower and was a tad overdressed and inappropriate. She wore a high slit gown that looked more red carpet.

For their first confessional looks, Laura wore a green blouse with a huge and distracting bow.

Tiannah looked great in a yellow jacket. Chioma wore an organza blouse but her makeup was just too much, you could see the bronzer glistening from her face. Caroline wore a simple sequined gown and Iyabo Ojo wore a dress with gold appliques – one thing we can say about how Iyabo Ojo lays her edges is it looks too oily and shiny.

For the second episode, they are all invited to a beach party at Iyabo Ojo’s request, but before the beach party, which Laura doesn’t attend, Laura goes to see Tiannah wearing a Fendi shirt we thought was simple and cute.

Now for the beach dinner party, everyone looked beautiful in their dinner gowns except Tiannah who looked like pink cake in a pink gown.

The next day, they had brunch. For brunch, Tiannah again offended the rules of fashion by wearing a very exaggerated beachwear, too much was going on with that. It was for the beach, not the cover of the magazine.

The prettiest outfit that day was Chioma’s. She wore yellow Andrea Iyamah dress and a raffia bag. Perfect beach attire.

Everyone else looked simple and gorgeous. Iyabo Ojo’s blue and yellow hair was interesting and stylish.

Now for episode 3, they had a garden party. All we could say was, ‘what is on Chioma’s hair?’ it looked like a bird’s nest. It was again – just too much. She looked like a bride at a beach wedding.

The housewives were divided, everyone liked it but Laura did not and we are with Laura on that one. Then we had Iyabo Ojo on a voluptuous hairdo, that hair made no sense at all. You don’t always have to lay edges or have an edgeless look. Just wear a normal wig sometime.

Our conclusion? Chioma is the fashion guru of the show. The cast members seem to choose the most over the top attires, makeup and styling. It is no surprise as Lagos is known for being loud and bold, but the flamboyance does subtract from the reality of the show. It feels like it is a dramatic set-up, is this how they look and dress in real life?