A new security chapter is opening in Europe – one that will require governments not just to say their top priority is the defence of their nation but to prove it with actions and investment.

Russia’s war in Ukraine has triggered this seismic shift, doing more to galvanise the NATO defence alliance than any event since its foundation more than 70 years ago – including through the entirety of the Cold War.

It is why two, historically neutral European countries, Finland and Sweden, look set to request membership to the club in defiance of warnings from Moscow – a stunning change in foreign and defence policy.

Finland’s leaders on Thursday said their country should apply “without delay”.

It was an eagerly-awaited statement of intent that signals a formal application could come within days.

The altered landscape also explains why the UK has just signed new security pacts with both Nordic states, guaranteeing to come to their defence should either be attacked.

This pledge already draws Helsinki and Stockholm closer to the blanket of collective security provided by NATO even before any formal move to accede to the 30-member club.

Such moves would have been unthinkable barely six months ago, with Finland and Sweden carefully balancing their relations with Western allies and with their vast Russian neighbour.

Finnish President Sauli Niinisto in particular has the longest relationship of all European leaders with his Russian counterpart, Vladimir Putin.

In the early days of the war in Ukraine, he was seen as someone who could most credibly head efforts to mediate a peace. 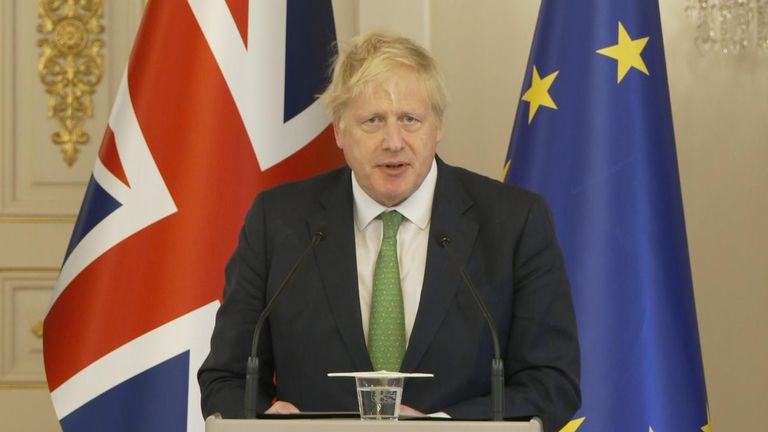 Now, he has triggered the starting gun on his country finally picking sides and joining an alliance that is focused on trying to contain the Russian threat.

Speaking at a joint press conference with Boris Johnson, who visited Finland and Sweden on Wednesday, Mr Niinisto said Mr Putin was to blame for his country’s change of heart.

He noted how Moscow had effectively told the two Nordic neighbours they could not join NATO. Then came the war in Ukraine.

“They are ready to attack a neighbouring country,” the Finnish president said. “If that would be the case that we join, well my response would be that you caused this, look at [in] the mirror.”

Finland and Sweden appear to be ready to adjust to the new security reality in Europe with actions rather than just words.

But they have a long history of living with the threat posed by Russia and their public has a deep understanding of the importance of security – unlike much of the rest of Europe.

This was conveniently highlighted in two questions put to Mr Johnson by British journalists at the Helsinki press conference.

One was on why the UK has given so much money and weapons to Ukraine while many British people face a cost of living crisis that means they cannot afford to heat their homes.

The other was on how credible any British pledge of military support to allies like Finland and Sweden can really be given the UK armed forces are now a fraction of the size they were three decades ago following cost-saving cuts and under-investment.

The questions perfectly summed up a dilemma that western politicians have faced since the end of the Cold War – how to justify investing in defence when the public does not feel under imminent threat?

They also illustrate a collective failure by political, military and security leaders to explain to the public how everything that a society holds dear – access to healthcare, schools, employment – falls apart when a nation is under attack.

NATO member states were far too quick to enjoy what they regarded as a peace dividend brought by the collapse of the Soviet Union.

Funding priorities were shifted away from defence and towards health, the economy and education – important to improve living standards and popular with voters.

It explains why the full-time British Army is a little over 70,000 soldiers now – compared with almost double that figure in 1990.

Over the same period of time, Russia never moved away from a war mentality, according to Kremlin experts. They note how Moscow is able to draw on all areas of the economy to wage a conflict and effectively how it never stopped contesting the West.

This was all well known and many experts have been sounding the warning alarm to Western leaders for years – to no avail.

That it has taken Russia launching a full-scale invasion of Ukraine for those same leaders, or their successors, finally to be shunted awake to this reality is dismal.

Today in Ukraine, just surviving is a blessing let alone thinking about health, education and jobs. The war has already killed tens of thousands of people, forced millions to flee and is threatening to destroy the futures of a generation.

There is no guarantee Russia’s offensive will be contained within Ukraine’s borders.

If anything good can come from the ruin, it will be for the UK and other European states to use this wake-up call to rebuild their defence capabilities and the resilience of their societies.

It is a huge challenge and one that cannot be achieved by rhetoric alone.