FREE TO WATCH: Highlights from Manchester City’s win against Newcastle in the Premier League

From the moment that the final whistle went in Madrid, thoughts turned to this fixture and what that sapping defeat in the Spanish capital might mean for Manchester City’s prospects of retaining the Premier League title. Newcastle on Sunday took on different perspective.

And yet, the mood in the stands was supportive from the outset. It felt like it had been helped by the result at Anfield the previous evening. That knowledge that City were no longer in a win-or-bust scenario took a little of the sting out of it. There was freedom.

Newcastle manager Eddie Howe seemed almost disappointed about that in his press conference after the game. “I thought the crowd were very good for them, it was a very good atmosphere.” He might have sensed an opportunity, but the mood was different.

Pep Guardiola picked up on it. “In the locker room, most of the time we talk about our away fans. When we play away they are good. Sometimes I say we have to play good [at home] to let them know today this is not a nice place to come.” That wasn’t necessary on Sunday.

The tempo was high from the start, the crowd urging their team on. Perhaps the Manchester City supporters sensed that their players needed them. The result was a 5-0 victory that settles the nerves and sets them on the way to a fourth title in five seasons.
Adam Bate

Newcastle’s reminder of the gap

The Newcastle fans at the Etihad Stadium were in party mood throughout, chiding the home support with reminders of their Champions League exit and gleefully pointing out that, following their own takeover, City may no longer have the richest owners in football.

The result on the pitch showed that while the gap in potential of these two clubs has been slashed, the gulf in the quality of the teams remains. Newcastle have work to do on the training ground and in the transfer market, something Eddie Howe was keen to stress.

“There is a huge gap between us and Liverpool and City, but there is that same gap between them and most of the clubs in the Premier League,” said the Newcastle manager in his press conference after his team’s 5-0 defeat. “We have to try to close that gap.”

That journey is a reason for Newcastle supporters to be excited. They will just need to be patient. “That has to be evolution not revolution because we have to be careful not to change too much too quickly. It has to be small, gradual steps to improve the team.”
Adam Bate

Can Arsenal take their big chance?

Arsenal took a big step towards securing Champions League football for next season with a 2-1 win over 10-man Leeds, but they didn’t make things easy for themselves.

The nerves were jangling at the Emirates Stadium as Leeds looked the more likely of the two sides towards the end of the game. Arsenal were the side holding on.

But hold on they did, and now they take a four-point lead to Tottenham on Thursday for what is a huge north London derby at the Tottenham Hotspur Stadium.

The Gunners now know a win at the home of their rivals would secure them a return to the Champions League for the first time since 2016, and it’s a big chance for them to take any nerves that might be there in this run-in out of the equation.

To a certain extent, the pressure is off Arsenal heading into Thursday’s game, which is live on Sky Sports. Spurs have to win to keep their top-four hopes alive, and that could play into the hands of Mikel Arteta’s side.

Much has been made of Arsenal being a young side, and just as we saw against Leeds, the nerves are never far from the surface, especially at this the business end of the season.

However, they have a huge opportunity to get the job done, and it will be even sweeter if they manage do it at the home of their north London rivals.
Oliver Yew

Watch Tottenham vs Arsenal live on Sky Sports from 7pm on Thursday; kick off 7.45pm.

No European hangover for Hammers

West Ham could have been forgiven for nursing a European hangover after the disappointing manner of their midweek Europa League semi-final loss at Eintracht Frankfurt.

But this Hammers squad under David Moyes has a steely focus and a different type of resilience about it – and it comes directly from the manager.

The Hammers made two changes from the side that were beaten in Germany, and both had a decisive impact at Carrow Road. 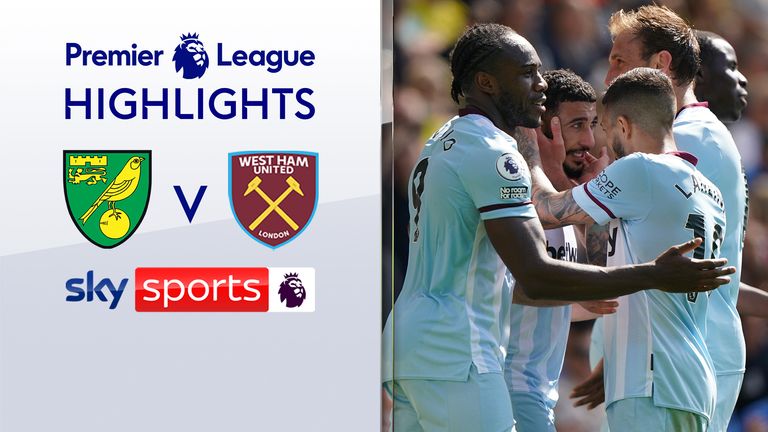 FREE TO WATCH: Highlights from West Ham’s win against Norwich in the Premier League

Vladimir Coufal replaced Ben Johnson, and he combined with Jarrod Bowen to give Norwich a torrid afternoon – Bowen ended up with a hat-trick of assists, taking his tally for the season to 10 and becoming the first West Ham player to notch at least 10 goals and 10 assists since Paolo Di Canio in the 1999/00 season.

Said Benrahma, who came in for Tomas Soucek, scored twice, as Moyes got his team selection spot on. There was even an opportunity to hand Mark Noble a run out off the bench on his 35th birthday.

An emphatic 4-0 win at Carrow Road, coupled with Manchester United’s embarrassing defeat by the same scoreline at Brighton has left the door open for West Ham to snatch sixth place and qualify for the Europa League again next season.

United, who are three points ahead of West Ham, will be cheering on bitter rivals Manchester City next weekend when they travel to the London Stadium for what could now prove a pivotal game in both the race for the title, and the race for a place in next season’s Europa League.
Dev Trehan 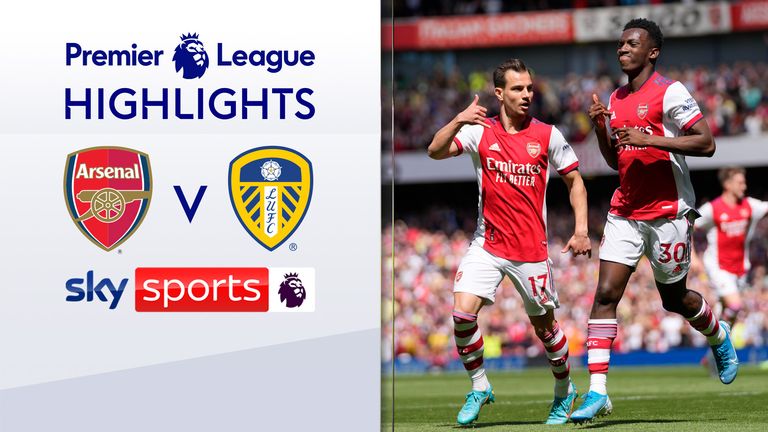 FREE TO WATCH: Highlights from Arsenal’s win against Leeds in the Premier League

Time running out for spirited Leeds

At 2-0 down and with 10 men, the game looked up for Leeds United at the Emirates Stadium.

It seemed like it was time for damage limitation for Jesse Marsch’s side, who had to play for just over an hour with 10 men after Luke Ayling’s mindless red card.

However, with the odds stacked against them, Leeds put in a hugely spirited second-half display, grabbed a goal through Diego Llorente, and they put Arsenal under significant pressure towards the end of the game as they searched for an equaliser that would hand them what seemed like an unlikely point after 27 minutes of the game.

Arsenal were the side hanging on by the end.

However, that is no consolation for Leeds, who also produced a spirited display in their 4-0 defeat to Man City.

Of course, Leeds need spirit. “The fight and determination we saw in the second half, we need,” said Marsch after the game.” But they also need results.

Leeds, who host Chelsea on Wednesday, live on Sky Sports (kick-off 7.30pm), have now suffered back-to-back defeats against Man City and Leeds and with the results of Everton and Burnley in recent weeks, they now find themselves in drop zone for the first time since October 30.

With just three games to go, time is starting to run out for spirited Leeds.
Oliver Yew

Pickford leading Everton out of trouble 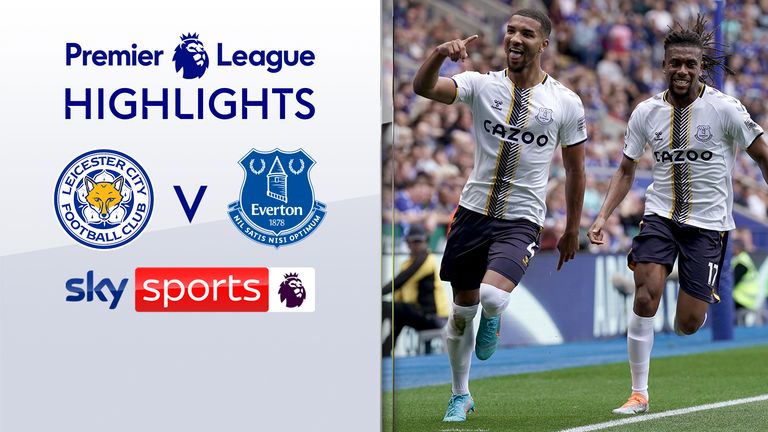 FREE TO WATCH: Highlights from Everton’s draw against Leicester City

As it stands, Jordan Pickford’s saves are keeping Everton in the Premier League. There are ways of dressing things up, but that’s the bottom line over the past two weekends. Two games, six points earned with plenty of grit and determination from the 10 outfield Everton players.

But when the back line has been breached, one man has stood tall, defied his critics and has underlined his status as the best English goalkeeper in the country.

Coinciding with Everton’s improvement has been a noticeable shift towards a less possession-based style that has started at Pickford’s feet, with his more direct distribution paying dividends. Pickford’s 17 passes into the final third was more than any other team-mate.

Goalkeepers are there to make saves, but sometimes they have no right to do so. Like last weekend, when Cesar Azpilicueta was left speechless at Pickford’s reactions.

And again, at the King Power Stadium, on three separate occasions to ensure Everton got over the line for a first away league win since August. Nampalys Mendy is still awaiting his first Leicester goal and he can’t have hit a cleaner strike that his bending effort from range that Pickford clawed around the post.

Harvey Barnes was next to be thwarted by the Everton goalkeeper’s sharp instincts twice in the space of three minutes. Roy Keane described Pickford’s time-wasting antics recently as “disgraceful” but said he understood why the tactics were employed – he’s a man forever under the microscope often unfairly – but there can be nothing but praise here.

Seven saves in total to drag his club out of the relegation zone – with a game in hand on Burnley and Leeds. Back-to-back wins for Everton for the first time since September, and as the 3,339 travelling supporters continued to sing Spirit of the Blues long after the final whistle from their seats – no man embodied such spirit as Jordan Pickford.
Ben Grounds

It’s a familiar story for Leicester. They cannot defend corners.

Mason Holgate’s headed winner for Everton at the King Power on Sunday was the 56th league goal Leicester have conceded this season. Fifteen have come from corners, the most by a side in a single campaign since Brighton in 2017/18 (16).

Leicester boss Brendan Rodgers said it had been a “problem all season” after Roma striker Tammy Abraham’s goal dumped his side out of the Europa Conference League on Thursday night – and it cost them again three days later.

“It’s becoming very irritable,” Rodgers said. “We’ve tried everything. I’ve looked at it in terms of the profile of player we have. We put in an extra centre-half to cope with those moments and changed the system for that.

“But we lack that concentration and determination to defend it and if you keep doing that, you undo a lot of your good work and that’s how it’s been for us too many times this season.”

Leicester’s season is now at risk of fizzling out. Their last win in all competitions came at PSV Eindhoven eight games ago, while their 10-match unbeaten home run was ended by an Everton side battling to avoid relegation.

A top-10 finish is the best the Foxes can hope for, but if they are to return to European football and hit the heights of previous years, Rodgers will need to work out how to solve a problem that has been his team’s Achilles’ heel time and time again.
Dan Sansom