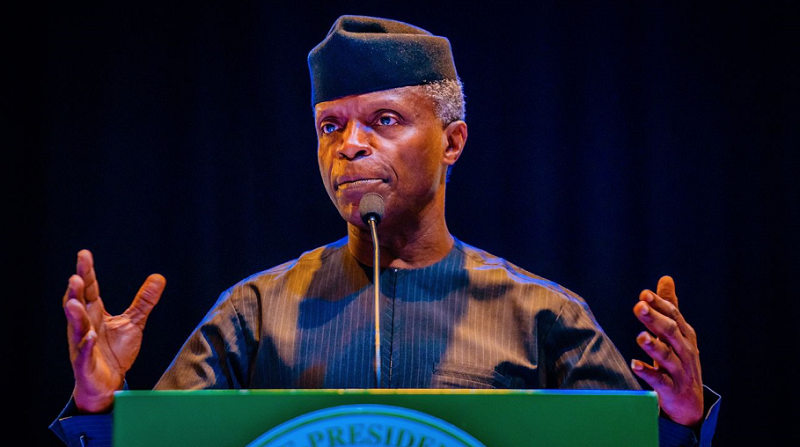 Nigeria’s Vice President, Professor Yemi Osinbajo, in a brief narration on his emergence as the running mate to President Muhammadu Buhari, has sparked some controversy, as he said that it was Rauf Aregbesola that informed him of the party’s decision around 1am on December 18, 2014.

Osinbajo, who is one of the presidential aspirants under the All Progressive Congress (APC) platform, in the explanation appears to have made no mention of the role or otherwise of the former Governor of Lagos State, Bola Tinubu, in his selection as the Vice Presidential candidate of APC.

This was made known by Osinbajo, while speaking when he hosted members of the State House press corps to Iftar (Breaking of fast during Ramadan) at his official residence on Wednesday in Abuja.

Osinbajo who pointed out that he was surprised at the party’s decision said he was working on a case when he received the news that he had been picked.

What the Vice President is saying

Osinbajo was quoted by Premium Times to have said, “I was working on the case at Peniel Apartments in Abuja on December 18, 2014, when at about 1:00 am in the morning, I received a call from Rauf Aregbesola that they were coming to Lagos to pick me.

“I said I was in Abuja. He said ‘good because you have been nominated as the vice-presidential candidate’ and I said that’s how you nominate people?”

This seems to have added to the different accounts of how Osinbajo secured the highly coveted vice-presidential slot, most of which revolve around his presumed political godfather and former boss, Bola Tinubu, who has also indicated an interest in contesting the 2023 presidential election.

It is widely believed that Tinubu played a major role in picking Osinbajo as Buhari’s running mate after which Aregbesola, a former close ally until recently, of the National Leader of APC, was mandated to inform the vice president.

However, Nigerians on social media have expressed divergent views on the statement by the vice president

A Twitter user Ninalowo said, “Aregbesola informed me of my nomination as vice president in 2014 from a confused serial betrayer.”

Aregbesola informed me of my Nomination as vice president in 2014 from a confused serial betrayal pic.twitter.com/VhzUw5UmrF

Another Twitter user, Shitter said can you imagine. Who was Aregbesola in 2014? Whose camp did he belong to? Can Aregbesola nomination stand if he was not the mouthpiece of Asiwaju if at all it’s like that?

Can you imagine. Who was Aregbesola in 2014? Whose camp did he belongs to? Can Aregbesola nomination stand if he was not the mouthpiece of ASIWAJU if at all, it’s like that? Alaimore eda pic.twitter.com/n6SvGJ2nRI

Sir Ferdinand Rogers said “Bisi Akande, Aregbesola and Amosun are the sole reason Osinbajo was chosen by Buhari as VP. In Akande’s book, he narrated how Tinubu was angry with Buhari for refusing Muslim-Muslim candidate which would have made him VP. Amosun convinced Buhari about Prof.”

Abdallah Ayofe Olaniyi said, “I thought God almighty informed you of it? Who until now was Aregbesola to Tinubu? Was it Aregbesola that nominated you?”

a Twitter user by the name Popuolanews in his tweet post said “imagine Osinbajo saying that he is not loyal to anybody. For someone to nominate you as VP then, don’t you know you’re already a president.”

Aregbesola informed me of my Nomination as vice president in 2014 from a confused serial betrayal
Cc. @ProfOsinbajo @raufaregbesola
Imagine Osinbajo saying he is not loyal to anybody 🙆‍♂️

4 someone to nominate you as VP then, don’t you know you’re already a President!

Chukwudi tweeted “Bola Ahmed Tinubu has been pushed to the side.”

Osinbajo: I learnt I was Buhari’s running mate in 2014 through Aregbesola

A Twitter Dora I said “this man dey make me fear church, how can you talk this way. Abeg fear God small.”

Adejames in his post said “now I know Aregbesola is behind Osinbajo declaration, he wants to tackle Tinubu for sure.”

Now I know Aregbesola is behind Osibajo declaration,he what to tackle Tinubu for sure

Another Twitter user simply known as POMPIN in his post said “beware of those you take to the top with you.”

Beware of those that you take to the top with you

Sege of Lagos in his own reaction noted that this story is not complete. He asked Mr VP, “is it Senator Ibikunle Amosun or Aregbesola that nominated you?”

This story isn’t complete Mr VP. Is it @SIAmosun and @AregbeQuotes that nominated you