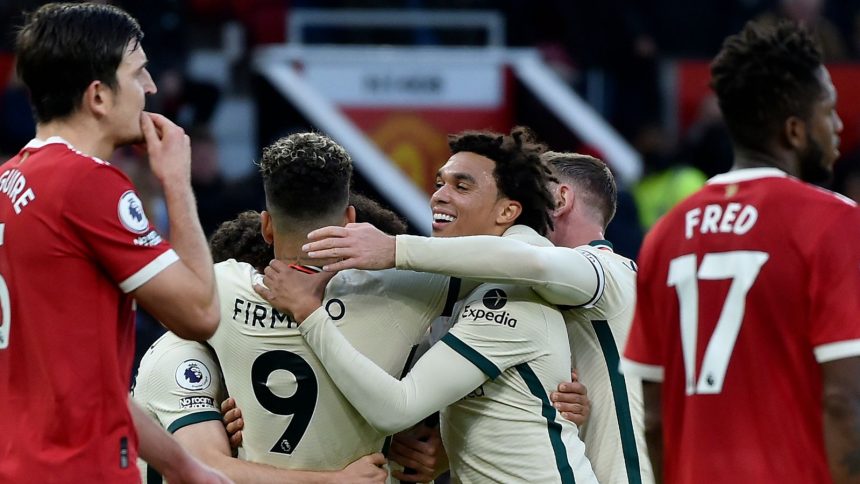 England’s two most decorated teams meet at Anfield on Tuesday – but, given their current struggles, would any Manchester United player make a combined XI with players from this Liverpool side?

While Jurgen Klopp’s team are chasing an unprecedented quadruple and go into the match fresh from reaching their first FA Cup final in 10 years with an impressive 3-2 win over Premier League title rivals Manchester City at Wembley, United’s sole remaining target for the season is finishing in the top four.

United boosted their chances of grabbing a Champions League qualifying spot with a 3-2 win over Norwich on Saturday – but were far from convincing against the Premier League’s bottom club.

Speaking after the previous week’s defeat against another relegation-threatened side, Everton, Sky Sports pundit Gary Neville said none of the United players are ahead of their opposite numbers at Liverpool.

FREE TO WATCH: Highlights from Manchester United’s win against Norwich

“When I look at Manchester City and Liverpool, they have humble football players; no over-inflated egos, they understand their position, the team comes first,” he said on his podcast.

“There isn’t one Manchester United player that would get into any of those two teams, so why would you have an over-inflated ego, think you didn’t have to work hard, or be spiritless? I don’t see anything anymore [from this United side].”

FREE TO WATCH: Highlights from Manchester City’s draw with Liverpool

So would you pick any Manchester United players in a combined XI with Liverpool?

Does Cristiano Ronaldo’s back-to-back hat-tricks in Premier League home games edge him ahead of an out-of-form Mohamed Salah? Does David de Gea have the edge on Alisson in the goalkeeping department?

Use our interactive tool below to pick your combined side…