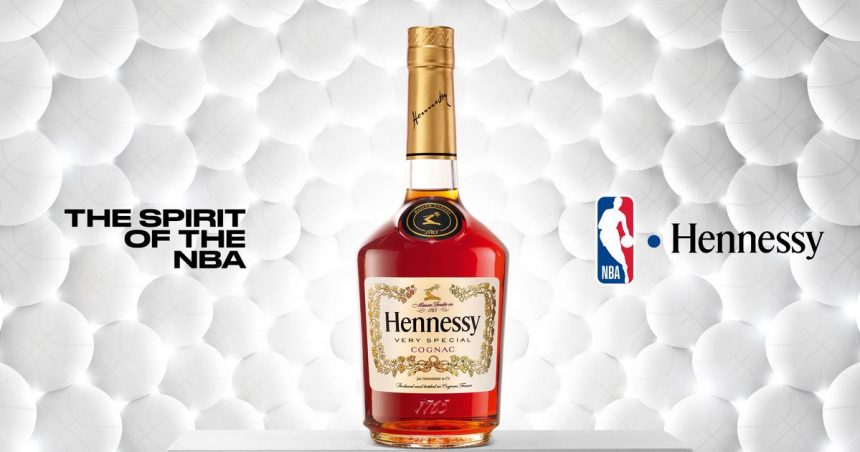 “In The Paint is part of a global series of artistic collaborations anchored on the role basketball plays within community, with the first initiative having launched in Montreal, Canada in 2021,” says Oluwole Awoleke, Marketing Manager Nigeria. “We’re excited to reveal the results of this synergy with Osa Seven – for Hennessy it’s always been about moving beyond the lines. Hennessy is more than a cognac and this project is a testament to the fact that Hennessy continues to be the brand that enables the true spirit of community through the In the Paint initiative”.

On the court, OsaSeven, shows the iconic “Bras Armé” symbol that is synonymous with Hennessy placed in the middle of the design, an elaborate display of the Benin Ivory mask which is used as the FESTAC official logo and a symbol of heritage. The choice of curved patterns and colors depicts clouds heavy with rain before the break of dawn, which re-emphasizes the resilient attitude of Nigerians which fits perfectly into Hennessy’s DNA

According to OsaSeven, ‘This Artwork which is made up of bold curve patterns, colors and the Benin Queen bronze head represents the point where yesterday and tomorrow meets… today “

The Park 23 court will open its doors to the public on the 18th of May 2022. To learn more about the initiative, visit Hennessy.com or @HennessyNigeria on Facebook.

18+ PLEASE DRINK RESPONSIBLY. PLEASE DO NOT FORWARD TO PERSONS UNDER 18 YEARS

The leader in Cognac, the Maison Hennessy has shined around the world with its exceptional blends for more than 250 years. Built on founder Richard Hennessy’s spirit of conquest, the brand is present in more than 160 countries. Based in the heart of the Charente region, Hennessy is also a steadfast pillar of the regional economy, the standard-bearer for a sector rich in expertise. The House’s success and longevity are rooted in the excellence of its cognacs, each of which is born of a unique process of transmission from generation to generation. The first wine and spirits house to be certified ISO 14001, Hennessy unites its capacity for innovation and the support of all of its partners to protect this exceptional area.

As the crown jewel of the LVMH Group, Hennessy is a major contributor to French international trade, with 99% of production sold in export, and a worldwide ambassador for the French art de Vivre.

Osadolor Okunpolor aka Osa Seven is a world-renowned Urban GFX and Graffiti Artist. Osa’s synonymy with meticulousness is well-lauded across the art and branding industry and his brilliance is impeccably evident in his work. His professionalism is deeply rooted in his over a decade worth of experience working in brand communications and his educational background in Visual Communication from the University of Lagos.

Osa’s contribution and dedication to contemporary art in Africa are well recognized across the continent, in 2016, he was nominated in the Arts & Culture Category Of The Future Awards Africa. Globally, Osa was commissioned by Hennessy in 2019 to be the first African Artist to create art for the Very Special Cognac in celebration of the Hennessy Artistry’s 10th anniversary in Nigeria.

Osa’s achievements cannot be understated. His long-time passion to create an impact and determination to change the perception of street art have deeply influenced the lives of many like him and the status quo. His influences in the African Art Scene picked the interest of CNN’s African Voices, where Osa was accredited for his philanthropy and unique gift. Since then, he has also been featured on BBC, Reuters, Super Sports, and other prestigious media houses.

Passionate about people and social impact, Osa is the co-founder of Socially Africa, an NGO that allows him and many others to give back to society.

The NBA is a global sports and media business built around four professional sports leagues: the National Basketball Association, the Women’s National Basketball Association, the NBA G League and the NBA 2K League. The NBA has established a major international presence with games and programming available in 215 countries and territories in more than 50 languages, and merchandise for sale in more than 100,000 stores in 100 countries on six continents. NBA rosters at the start of the 2020-21 season featured 107 international players from 41 countries. NBA Digital’s assets include NBA TV, NBA.com, the NBA App and NBA League Pass. The NBA has created one of the largest social media communities in the world, with 1.9 billion likes and followers globally across all league, team, and player platforms. Through NBA Cares, the league addresses important social issues by working with internationally recognized youth-serving organizations that support education, youth and family development, and health-related causes.

About the author: Nwafo
Tell us something about yourself.
TAGGED: Lifestyle
Editor May 16, 2022
Share this Article
Facebook Twitter Whatsapp Whatsapp Telegram Email Print
What do you think?
Love0
Sad0
Happy0
Angry0
Dead0
Surprise0
Cry0
Leave a comment