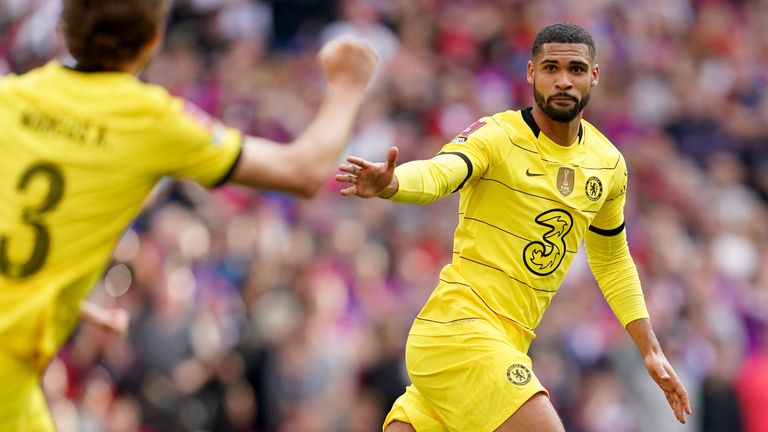 Ruben Loftus-Cheek and Mason Mount scored second-half goals to send Chelsea into their third consecutive FA Cup final with a 2-0 win over Crystal Palace at Wembley.

On a glorious Easter Sunday afternoon in London, substitute Loftus-Cheek’s first goal of the season (65) and Mount’s composed finish 11 minutes later were enough to book a meeting with seven-time winners Liverpool on May 14.

After a quiet and uneventful first half, the tie needed a moment of magic and Loftus-Cheek, who had replaced the injured Mateo Kovacic in the 26th minute, delivered just that.

N’Golo Kante was only on the bench, with Thiago Silva and Ruben Loftus-Cheek also out of the starting XI.

Crystal Palace boss Patrick Vieira made four changes from the side that lost 2-1 to Leicester in the Premier League last weekend.

Palace left-back Tyrick Mitchell was caught on the ball and, after a couple of quick one-touch passes saw Kai Havertz advance into the box, his half-cleared effort was smashed home by Loftus-Cheek via a slight deflection for the opener.

Eleven minutes later and Chelsea put the result beyond any doubt. Timo Werner’s simple square ball from the edge of the box was played past Joachim Anderson by Mount’s first touch, before the England international then buried the ball beyond Jack Butland with his second for his 12th goal of the campaign.

After losing to Arsenal in 2020 and Leicester last year, Chelsea will hope it is third time lucky at Wembley next month when they target a ninth FA Cup title.

The result capped a successful day for the club, with Chelsea Women having earlier progressed to their third FA Cup final in five years after beating Arsenal 2-0.

Chelsea host Arsenal in the Premier League on Wednesday at 7.45pm – live on Sky Sports Premier League. Up next for Crystal Palace is a trip to Newcastle at the same time.