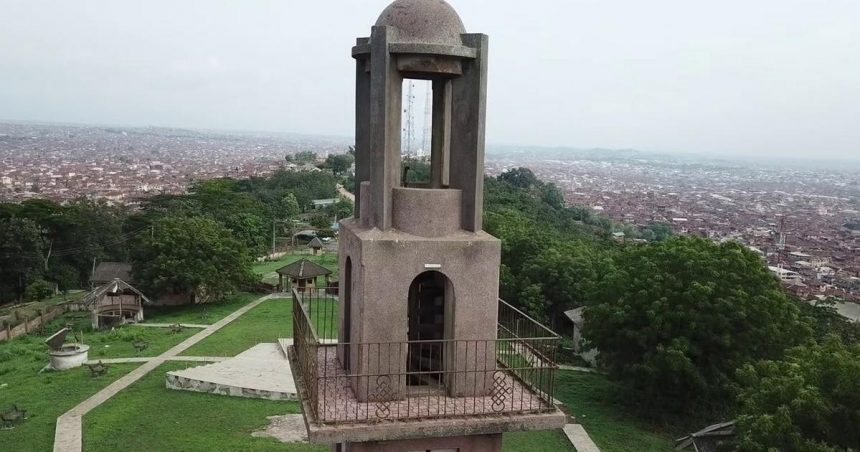 The Bower’s tower, a historical monument standing 60 feet tall in Oke Are, Ibadan was designed by Taffy Jones, in 1936. Taffy Jones was also the engineer that designed the Mapo Hall, another historical landmark in Ibadan. The Bower’s tower was put up to honor Captain Robert Lister Bower who was the first British resident in Ibadan. He was appointed by the British government as the traveling commissioner of Yorubaland, southwestern region of Nigeria, between 1893 and 1897.

The historical tower is 60 feet high and 11 feet square with two entrances and about 47 spiral staircase that leads to the top of the tower from where one can get a 360 panoramic view of the town and appreciate its history. The building was nicknamed ‘Layipo’ because of its long spiral staircase which some claim to make them dizzy after climbing. It served as one of the most visited tourist centers in the city of Ibadan.

According to history, the tower was named after Bower in appreciation of his contribution to the development and growth of Yorubaland. From the top of the tower on a clear day, you can see some important landmarks such as the cocoa house, the University College Hospital (UCH), The University of Ibadan, Dugbe market, Agodi gardens, the defunct Lagos/Ibadan toll gate and lots more depending on how good your eyesight is. This historical monument served as a watchtower during the colonial era from where it was very easy to monitor the activities of the town and the neighboring Yoruba towns.

The Bower’s tower is definitely a place to visit in Ibadan. visitors to the tower get to climb the 47 spiral staircase, enjoy a panoramic view of the city, identify major landmarks from the top, take beautiful pictures of the town, and even organize a picnic. The tower opens from 9 AM to 5 PM daily and it requires a fee of 200 naira to enter into the tower. When visiting the tower, it is advised to dress comfortably as it involves a lot of climbing.

For the love they have for the Tower and for allowing one to see the many wonders of the city from its top, the Ibadan natives have attached so much importance to the Tower. Therefore, it is common to hear such things as “Whoever comes to Ibadan and has not visited this Tower” (called Layipo) to view the city does not know Ibadan, “Ibadan lo mo, o mo Layipo” which directly translates to “It is Ibadan you know, you don’t know Layipo”