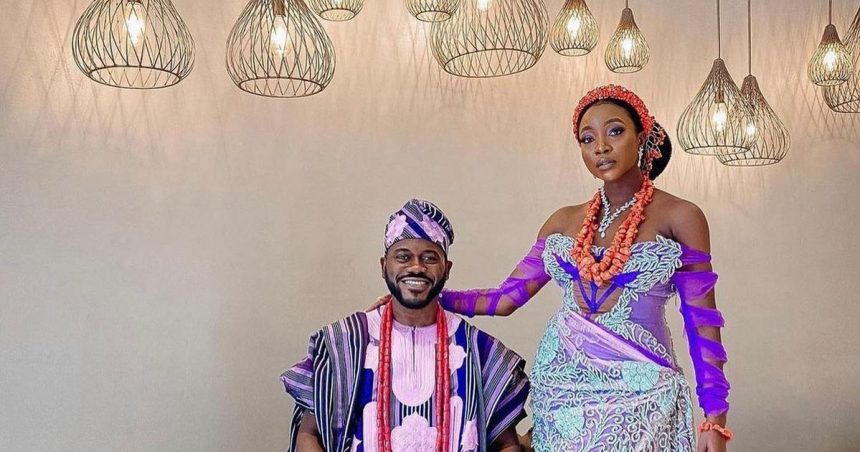 It follows the story of a lady and her friend running away from the police and her fiance’s brutal family after her friend kills her fiance, and they both bury the body.

Very few things can ruin a movie the way wrong makeup or a terrible wardrobe would. But when gotten right, makeup and wardrobe can help improve the quality of a story.

So how much fashion did ‘Blood Sisters’ get right?

The first scene is about a wedding celebration and even real weddings are not as beautiful. Every cast member looked the part.

Like in a real wedding, the stars of the ceremony were the bride and groom. Ini (Sarah) spotted a purple two-piece, Igbo bride style and Deyemi (Kola) wore a purple aso-oke.

In the first part of the movie, an assassin tries and fails to kill Kola, ironically, Kola is still killed that night. The assassin was so easy to spot. I mean, who wears a leather jacket to a wedding? He should have carried a placard or screamed, “I do not belong here,” but we can let the assassin’s error go, he’s obviously inexperienced.

Special props need to go to Kate Henshaw’s (Uduak) costume. It brought to life to the over-the-top character she played. In the first scene, we saw Kate (Uduak) in a yellow aso-oke with exaggerated sleeves, she looked so in charge and control.

All through the movie, we saw Kate with embellished capes, A-shaped gowns and kimonos, those outfits helped her play the evil role magnificently. We remember vividly, a scene of her coming out of a private jet with her cape trailing behind her – so badass.

Ramsey Nouah wore a black suit throughout and we are tempted to believe that it was the same suit but it still worked with his role as a stealth hitman and bodyguard.

Genoveva Umeh who plays Timeyin fashion was a hot mess. She is supposed to be a Gen Z gothic brat and her styling definitely showed that.

Nancy (Kemi) and Ini (Sara) dressed like you would expect every twenty-something year old to do – stylish two-pieces and bob wigs.

We especially related to the part where Nancy removed her wig and Ini joined her – the feeling of relief you get when fresh air blows on your hair after wearing a wig all day is blissful.

For most of the film, these women were on the run and you could see the weariness on their faces, wearing jeans and shirts and anything they could lay their hands on – it helped the storytelling because imagine they were running with a face full of foundation and frontal closure wigs.

The wounds and cuts in the movie also looked painfully realistic.

The answer to the question asked earlier, did they kill the fashion and styling? Yes, they murdered it — in a very beautiful way, we must add.