Russian forces have begun storming the besieged Azovstal steelworks in Mariupol – as survivors reached safety and began to tell their stories.

One woman said the assault began “as soon as we were brought out” of the plant in the Ukrainian port city.

Another spoke of the “animal fear” she felt when the building she was in was hit by a bomb.

About 200 civilians are still inside the steelworks, Mariupol Mayor Vadym Boichenko said, while 100,000 remain in Mariupol as a whole.

Sviatoslav Palamar, deputy commander of Ukraine’s Azov Regiment, said the Russians were mounting a heavy assault with the “support of armoured vehicles and tanks, with attempts to land troops from boats and a large number of infantry”.

“But we’re calling for urgent measures to evacuate the civilians that remain inside the plant.”

It began almost two weeks after Russian President Vladimir Putin ordered his military to block the plant off rather than storm it.

Over the weekend, 101 people including children left the “bunkers” below the plant and saw the “daylight after two months”, said Osnat Lubrani, the UN’s humanitarian coordinator for Ukraine.

They are receiving “humanitarian assistance, including health and psychological care”, Ms Lubrani said. 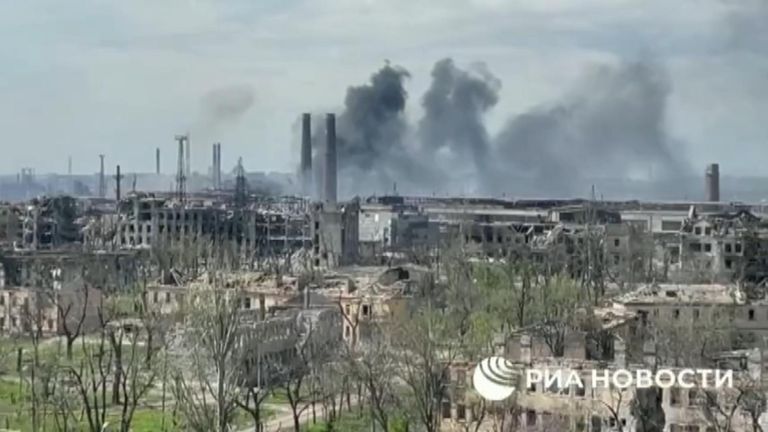 Arriving in Zaporizhzhia on Tuesday, about 140 miles northwest of Mariupol, they explained what they had been through.

How can Russian forces “do this in the “21st century”, one woman asked.

“What kind of head do you have to have to think up something like this,” she wondered aloud.

Her family’s homes have been reduced to rubble, she said.

After lying in a corridor for four days there was a direct hit on the building she was in, the woman said.

“The door hit me on the ear. We grabbed our things and we began to run.”

Another woman said she was worried for her boyfriend who had stayed behind at the steelworks.

Mariupol is now just “bricks mixed with soil”, she told reporters after arriving in Zaporizhzhia, while the nine-floor building she lived in is “just a carcass now”.

Russians shelled buildings without any regard for whether there were residents inside or not, she said.

Talking about her time in the steelworks, she said: “I lived in a basement. We cooked food on a campfire. The military brought us food and water (and) we slept on benches, on doors, wherever we could.”

Describing herself as “lucky”, she said there was water they could heat on the campfire and they were able to wash.

“It was thanks to the military,” she said. “Without them we wouldn’t have been able to survive there.”

“As soon as we were brought out, (Russians) began to storm the steel works.”