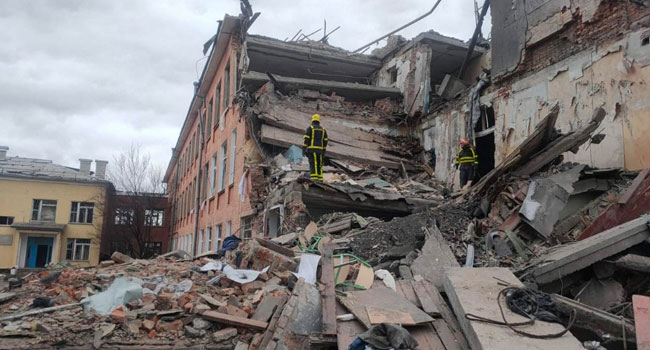 US President Joe Biden announced an $800 million military aid package for Ukraine on Wednesday as international prosecutors declared the war-torn Western ally a “crime scene” amid fears of a massive revamped Russian assault.

The announcement came with the Russian military threatening to strike Ukraine’s command centers in the capital Kyiv if Ukrainian troops continue to attack Russian territory.

“We are seeing Ukrainian troops’ attempts to carry out sabotage and strike Russian territory. If such cases continue, the Russian armed forces will strike decision-making centers, including in Kyiv,” the Russian defense ministry said in a statement.

The warning sparked alarm in Ukraine’s largest city, as Moscow was believed to be refocusing its war aims — withdrawing from Kyiv after failing to capture it and shifting attention to the south and east.

Biden has accused President Vladimir Putin of genocide — a claim dismissed as “unacceptable” by the Kremlin — as Russia comes under increasing scrutiny over atrocities discovered in towns since abandoned by its forces.

The Pentagon says it has been looking to provide Ukraine with weapons that would “give them a little more range and distance,” with Kyiv girding for a huge escalation of violence in the eastern Donbas region.

The new US shipment will include armored personnel carriers, helicopters, and some of the heavier equipment Washington had previously refused to send to Ukraine for fear of escalating the conflict with nuclear-armed Russia.

Before announcing the aid, Biden spoke to Zelensky for about an hour, the White House said, pledging “to provide Ukraine with the capabilities to defend itself.”

The Hague-based International Criminal Court, which deals with rights abuses, has investigators in Ukraine and told reporters the country had become a “crime scene.”

Officials in the Kyiv suburb of Bucha — now synonymous with scores of atrocities — say more than 400 people were found dead after Moscow’s forces withdrew, with 25 reported rapes.

“We’re here because we have reasonable grounds to believe that crimes within the jurisdiction of the court are being committed,” the ICC’s chief prosecutor Karim Khan said on a visit to the town.

Lithuanian President Gitanas Nauseda made his own trip to the town of Borodyanka, a half-hour drive further northwest, calling the area “permeated with pain and suffering.”

Meanwhile, the Organization for Security and Co-operation in Europe said Russia had engaged in “clear patterns of international humanitarian law violations.”

Before the latest military aid package, the United States had supplied or promised Ukraine 1,400 Stinger anti-aircraft systems, 5,000 Javelin anti-tank missiles, several thousand rifles with ammunition, and a range of other equipment.

Reportedly using Ukraine’s own Neptune missiles, Kyiv claimed Wednesday to have damaged the Russian Black Sea fleet flagship “Moskva” off the coast of the strategic port of Odessa.

But even with their own weaponry and US support, Ukrainian forces have struggled to hold the key southern port of Mariupol, where Zelensky has estimated “tens of thousands” of civilians have died.

The plant’s maze-like complex has been a focus of resistance in Mariupol, with fighters using a tunnel system below the vast industrial site to slow Russian forces down.

But the city is part of an apparent Russian push to create an unbroken corridor from occupied Crimea to Donbas, where Russian-backed separatists control the Donetsk and Lugansk regions.

Leonid Pasechnik, a separatist leader in eastern Ukraine, said up to 90 percent of territory of the self-proclaimed Lugansk People’s Republic was now under rebel control.

He told reporters separatist troops would “liberate” the rest of the territory and then decide whether to support Russian troops in the so-called Donetsk People’s Republic.

Britain said Wednesday it would sanction 178 Russian separatists and the leaders of the Donetsk and Lugansk People’s Republics, as well as six more oligarchs and their families.

Russia announced its own sanctions Wednesday, introducing retaliatory measures against 398 members of the US Congress and vowing more sanctions would follow.

In a desperate attempt to flee what Ukrainian authorities warn will be a bloody new clash in the east, more than 40,000 people have left the country in the past 24 hours, the United Nations said, bringing those displaced abroad to 4.6 million since the conflict began.

But Kyiv halted humanitarian corridors in several parts of the country Wednesday, deeming them “too dangerous” for evacuations.

Others have chosen to stay, like Maria, a resident of the most easterly city still held by Ukrainian forces, Severodonetsk.

“There’s no electricity, no water,” said the young woman, who did not want to flee her home even though the bombing from Russian forces has made the city a deserted shell of its former self.

“But I prefer to stay here, at home. If we leave, where will we go?”

Underscoring the risk to civilians, Ukrainian prosecutors on Wednesday accused Russian troops of shooting six men and one woman the day before in a home in the occupied southern village of Pravdyne.

But even as the military focus shifted eastward, the grim work of accounting for the civilian dead continued in areas recently abandoned by Russia’s army.

North of Bucha in Gostomel, locals exhumed the body of Mayor Yuriy Prylypko, whom authorities said was shot while “handing out bread to the hungry and medicine to the sick.”

Up to 400 people are unaccounted for in the town, said regional prosecutor Andiy Tkach. AFP witnessed dozens of body bags filling a refrigerated lorry trailer, as two others awaited more corpses.

“Our citizens are murdered and we must bury every person in the right way,” said Igor Karpishen, loading the truck.

“I don’t have any words to express these feelings.”

The United Nations has asked for a ceasefire as it awaits a Russian response to concrete proposals for evacuating civilians and delivering aid.

“That was our appeal for humanitarian reasons but it doesn’t seem possible,” UN Secretary-General Antonio Guterres told a news conference.