Britain and NATO are not planning and have never planned to invade Russia, the UK’s defence secretary has said, after Russian President Vladimir Putin justified his war in Ukraine by saying the West was preparing to launch an attack on “our land”.

Ben Wallace, during a speech and Q&A during which he discussed Russia‘s actions and the plan to help Ukraine defeat them, hit back at comments made by the Russian leader at his country’s Victory Day parade in Moscow.

“President Putin has made a number of fairytale claims for months and years now,” he said.

“One of his claims is that he is surrounded. NATO accounts for 6% of his land border. That’s not being surrounded if only 6% of your land border is NATO countries.

“I think he is believing what he wants to believe – a slight shine of desperation. But let me put on the record categorically: NATO, Britain, eastern Europe is not planning to invade Russia and never has done.”

During his speech, Mr Putin said Russia’s intervention in Ukraine was necessary because the West was “preparing for the invasion of our land, including Crimea”.

Crimea was annexed by Russia in 2014, despite it being part of Ukraine’s sovereign territory.

Addressing massed ranks of servicemen on Red Square on the 77th anniversary of victory over Nazi Germany, Mr Putin condemned what he called external threats to weaken and split Russia, and repeated familiar arguments he had used to justify its invasion, telling them they were “fighting for our people in Donbas, for the security of Russia, our homeland.”

But, in a speech attacking Russia’s top brass, Mr Wallace said Mr Putin was mirroring the actions of the Nazis by their invasion of Ukraine and his generals should face court martial for their failures, some of which have led to “war crimes”.

Mr Wallace, speaking at the National Army Museum in Chelsea, south-west London, said: “Through the invasion of Ukraine, Vladimir Putin and his generals are now mirroring fascism and the tyranny of 77 years ago, repeating the errors of the last century.

“They are showing the same disregard for human life, national sovereignty and the international rules based system – the very system that (underpins) not least the United Nations charter itself, which we conceived together and were victorious and fought for together in the hope of saving future generation from the scourge of war.

“Their unprovoked, illegal, senseless and self-defeating invasion of Ukraine, their attacks against innocent civilians and their homes, their widespread atrocities, including the deliberate targeting of women and children – they all corrupt the memory of past sacrifices and Russia’s once proud global reputation.” 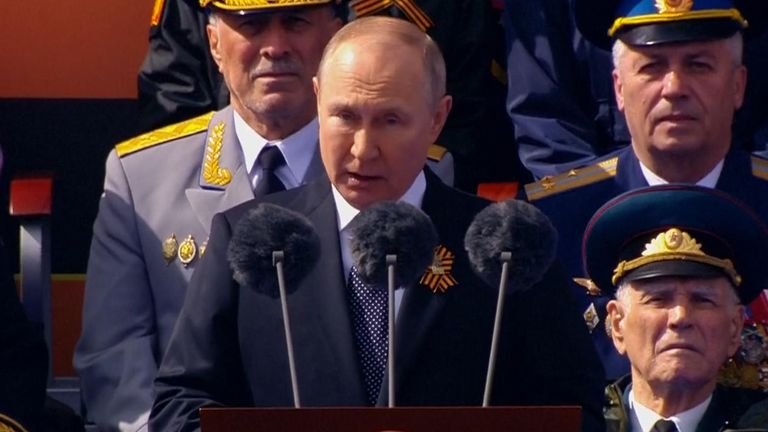 Putin hits out at NATO during speech

Read more:
Putin will have no victory in Ukraine war to brag about

The defence secretary’s words come after another relentless day of attacks in Ukraine.

At least 60 people were feared dead under rubble after a Russian bomb hit a school in eastern Ukraine.

Four ways ‘Russian top brass have let down their troops’

Mr Wallace detailed four ways in which the Russian military leadership had demonstrated an “absence of integrity and leadership”, including “bad battle preparation, poor operation planning, inadequate equipment and support and corruption of the moral component”.

He added: “Let’s call out the absurdity of Russian generals resplendent in their manicured parade uniforms, weighed down by the gold braid and glistening medals.

“They are utterly complicit in Putin’s hijacking of their forebears’ proud history of defending against the ruthless invasion, of repelling fascism and sacrificing themselves for higher purpose.”

Criticism of the government’s mission clarity

Despite the early failures of Russia’s forces to defeat Ukrainian resistance, Mr Wallace’s speech came amid criticism that the UK government lacks a clear plan, with the Conservative chair of the defence select committee Tobias Ellwood challenging Mr Wallace to provide clarity on what failure for Russia would look like.

It comes ahead of a NATO conference in late June when heads of government will discuss how the group plans to further oppose “Russian aggression”.

When he was asked to clarify his mission in Ukraine at the Q&A, Mr Wallace said: “Putin must fail in Ukraine is our key policy mission, but we mustn’t avoid the fundamentals here, which is that is it for Ukraine to choose how it ends this conflict, how it makes Russia end this conflict.

“Whatever they choose, we will stand by them and help them deliver that, and if it’s a short term… that only goes on for a few months, because Russia realises its in a fix, or it wants to shift into a frozen conflict, whatever, however all of these different scenarios play out, it’s fundamentally for Ukraine to choose how to deal with the issue.”

About the author: Nwafo
Tell us something about yourself.
TAGGED: World News
Editor May 9, 2022
Share this Article
Facebook Twitter Whatsapp Whatsapp Telegram Email Print
What do you think?
Love0
Sad0
Happy0
Angry0
Dead0
Surprise0
Cry0
Leave a comment