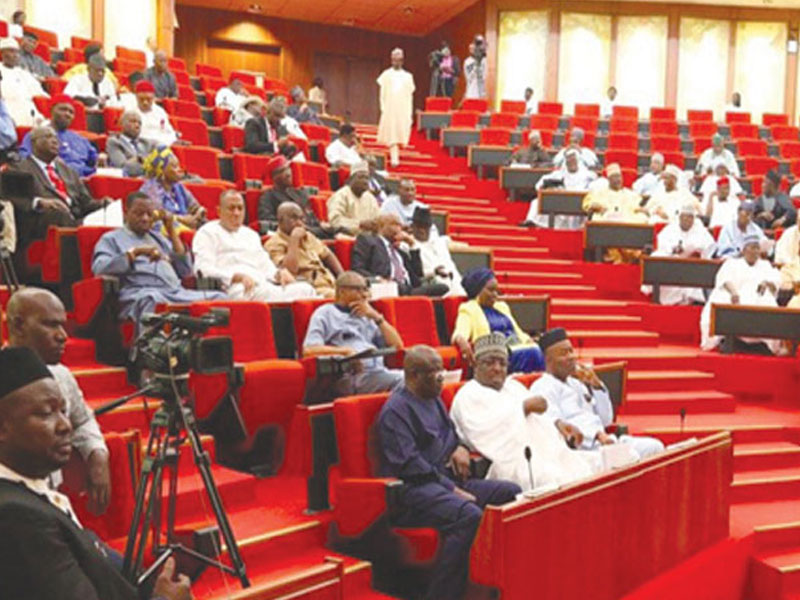 Udora Orizu writes that members of the Senate at plenary, last week, amended the Terrorism Act, prohibiting payment of ransom to kidnappers in the country

The Senate last week passed a bill seeking to amend the Terrorism (Prevention) Act, 2013, to prohibit the payment of ransom to kidnappers in Nigeria.

The word kidnap is associated with the criminal activity in which a person is taken away usually against the his/her will, and this is usually done for ransom. Kidnapping has become a serious threat to Nigeria. Between January 2015 and May 2020, no fewer than 4,962 persons were reportedly kidnapped across the country. The figure may not be accurate as security agencies tasked with the primary responsibility of investigating and tackling kidnapping, sometimes do not always record incidents of kidnapping.

In July, 2021, about 140 students were kidnapped from a Baptist High School for ransom in northwest Kaduna. In September 2021, about 73 students were abducted from a state-run high school in Zamfara’s Maradun district, on February 17, a gang of gunmen kidnapped more than forty students, teachers, and administrators from a secondary school in Niger State. In December, “bandits” kidnapped some three hundred schoolboys from a school in Kankara, located in Katsina State. In 2014, the kidnapping of more than 200 schoolgirls from a school in Chibok acquired international notoriety. While there have been several other mass kidnappings, the most recent which shook the nation to the core is the March 28, terrorists attack of a Kaduna-bound train, during which eight passengers were killed, 41 injured and scores of others kidnapped. The terrorists in a video which surfaced online had threatened to kill the abductees if government fails to provide what they want.

For decades this criminal act, has become a lucrative business, with the federal government struggling to find a solution. Previously these kidnappings were considered to be politically motivated, however this dastardly act have gone beyond the initial political nature.

In these recent instances, kidnappers are after ransom, they ask for a ransom regardless of the victim’s socioeconomic status, because they are well aware that families will do whatever they can to guarantee the safe return of their loved ones.

According to a report by a Lagos-based research consulting firm, SB Morgen Intelligence, between June 2011 and March 2020, Nigerians paid kidnappers an estimated $18.34 million as ransoms (N8.98 billion).

In a bid to discourage the rising spate of kidnapping and abduction for ransom which is fast spreading across the country, the Senate at the plenary last week passed a bill seeking to amend the Terrorism (Prevention) Act, 2013, to prohibit the payment of ransom to kidnappers in Nigeria.

The passage of the bill, followed the consideration of a report by the Committee on Judiciary, Human Rights and Legal Matters, laid by the Committee’s Chairman, Senator Opeyemi Bamidele (APC, Ekiti Central).

Bamidele, in his presentation, said the bill seeks to outlaw the payment of ransom to abductors, kidnappers and terrorist for release of any person who has been wrongfully confined, imprisoned or kidnapped.

According to the lawmaker, “the overall import of this bill is to discourage the rising spate of kidnapping and abduction for ransom In Nigeria, which is fast spreading across the country.”

He disclosed that in the memoranda presented to the Committee, plethora of issues relating to the subject matter of terrorism and terrorism financing in line with global best practices were raised.

He assured that the amendment to the Terrorism Act would set standards and regulatory system intended to prevent terrorist groups from laundering money through the banking system and other financial networks.

He added that, “having policies in place to combat financing of terrorism will surely reduce or eliminate privacy and anonymity in financial and other sundry transactions as it relates to the subject in our society.”

He explained further that the need to comprehensively review the Terrorism Prevention Act arose from the unfavourable ratings of Financial Act Task Force (FATF) recommendations of Nigeria’s Mutual Evaluation Report and consequent placement of Nigeria in FATF’S International Cooperation and Review Group Process with its impending sanctions on Nigeria’s economy.

He stated that the National Task Force on improving Nigeria’s Anti-Money Laundering and Countering the Financing of Terrorism (AML/CFT) regime in Nigeria, proposed improvement on the Act in order to address the deficiencies noted in its provisions so as to align with the required standard as obtainable in other jurisdictions.

He emphasised that the proposed repeal and enactment bill was geared towards improving the effectiveness of countermeasures against terrorism, terrorism financing and proliferation financing.

The lawmaker noted that the repeal is aimed at providing adequate framework for improved international collaboration, inter-agency cooperation and freezing of terrorist funds/assets.

Bamidele said: “The passage of this bill will save Nigeria from being included among countries in the Financial Action Task Force (FATF) Grey List with its attendant negative consequences, which might ultimately result to international sanctions that would affect the image of the country in the comity of nations.”

The Senate President, Ahmad Lawan, in his remarks after the bill was passed, said the bill would compliment the federal government’s efforts in the fight against insecurity when signed into law by the president.

He said: “It is our belief here in the Senate, that this bill, by the time signed into an Act by Mr. President, will enhance the efforts of this government in the fight against terrorism, kidnapping, and other associated and related vices. This is one piece of legislation that can turn around not only the security situation in Nigeria, but even the economic fortunes of our country. We have done so much as a government, in terms of infrastructural development across all parts of this country, but because security situation is not the kind of situation that we all want, this tends to overshadow all the tremendous and massive developments in our country.

“I believe that the Executive will waste no time in signing this bill into law, and it is our hope that this additional piece of legislation will achieve the purpose for which it has been worked upon by the Senate, and, indeed, the National Assembly and, for the reason for which it would also be signed by Mr. President. Let me make it very clear here, that the fight against insecurity, whether it is kidnapping, terrorism or whatsoever, is not the sole role of a government. The contribution and support by citizens is essential, because our security agencies need vital and critical information against terrorism and other things that make life difficult for us.”

Will the Bill Stem Kidnapping Scourge?

While the proposal by the Senate to enact a law banning payment of ransom to kidnappers and making it a criminal offence for those connected with such payments maybe laudable and in tandem with international best practice against kidnapping, unfortunately, it is not so possible in Nigeria, as the country lacks the structure to prevent, mitigate and rescue victims.

The lawmakers are expected to be more worried about the failure of official security architecture that has made kidnapping so easy for the criminals and hence should task the federal government to take more proactive actions to put in place a robust security apparatus that will make kidnapping impossible for the perpetrators and where it happens, a prompt and efficient system to neutralise them.

Many have said the bill is tantamount to putting the cart before the horse. They think the lawmakers were just playing to the gallery. They also wonder how government will outlaw payments of ransom when that is the only choice we have?

To be real, who will his loved one be kidnapped and not will move mountains to get the person released. Even if it means selling all his belongings to see his loved one alive and happy.

“Currently, over 1,000 people in the country are in the hands of bandits and terrorists and so far the country cannot rescue them. That’s a simple truth. Unless we want to continue deceiving ourselves, out of every 10 persons released by terrorists, at least 8 were because the ransom was paid and maybe one managed to escape.

“For over a month, over 30 Abuja-Kaduna train passengers are still in the hands of terrorists. The most heartbreaking story was about one of the victims who gave birth in captivity. The picture of the beautiful baby broke the hearts of many, she was oblivious to her situation. The security agencies have not been able to secure their release. The Managing Director of Bank of Industry that was released I am sure paid the ransom.

“In an ideal situation, the law would have worked. Paying ransom to kidnappers emboldens them. They get more money to finance their illicit operations. The bandits use the money to buy more weapons and bikes. But we are not in an ideal situation in Nigeria, The Nigeria Police Force cannot handle issues of kidnapping by terrorists. The armed forces have been overstretched as they have practically taken over internal security in the country. So, where do Nigerians go from here? The thing the National Assembly needs to first fight for is to strengthen the country’s security agencies with more equipment and investment in modern technology. With modern equipment, fewer men are needed to achieve more results,” said an analyst.

This is why observers have  described the amendment as waste of time and a law that is only good for the book shelf.

They noted that in a country where security agencies are ineffective, many have wondered if the Senate in passing the new law, wants their loved ones who have been kidnapped to die in captivity?