When Russia began its invasion of Ukraine in the early hours of 24 February, the first foreign leader Ukrainian President Volodymyr Zelenskyy called was Britain’s Boris Johnson.

Asked why the UK prime minister was number one on the list, the president’s top security official told Sky News: “They are friends. Britain is our friend.”

Oleksiy Danilov has been by Mr Zelenskyy’s side in the capital Kyiv for the past eight weeks of war as Secretary of the National Security and Defence Council of Ukraine.

He revealed how he had spoken to his boss at the start of Russia‘s offensive – aimed at toppling Ukraine’s government – about the risk of remaining in Kyiv, saying the advice from western intelligence agencies had been for the president to leave.

“He told me: ‘I will not go. What happens will happen. We will fight’… You need to be brave to say those words in that moment.”

Live updates on the war in Ukraine

• US President Joe Biden convened military leaders at White House after planning more weapons assistance to Ukraine
• The food security crisis caused by the war could last into next year, the World Bank warned
• Boris Johnson said peace talks with Russia are likely to fail and compared holding talks with Putin to negotiating with a crocodile
• Wimbledon has barred all Russian and Belarusian players from this year’s tennis championships

Mr Danilov, wearing a green band on his right arm – a marker worn by all Ukrainian defenders – said he was confident his country would defeat Russia. But he said victory would come “much faster” if western allies deliver promised weapons as soon as possible.

‘War will finish with our victory’

“Now we need heavy weapons, we need armoured vehicles. We need long range artillery… It is very, very necessary to us,” Mr Danilov said in an interview on Thursday, noting that the speed of delivery of weapons had increased over the past fortnight.

Asked how the war will end, he said: “It will finish with our victory… If those weapons which our partners promised to us will be delivered as soon as possible it can be much faster.” 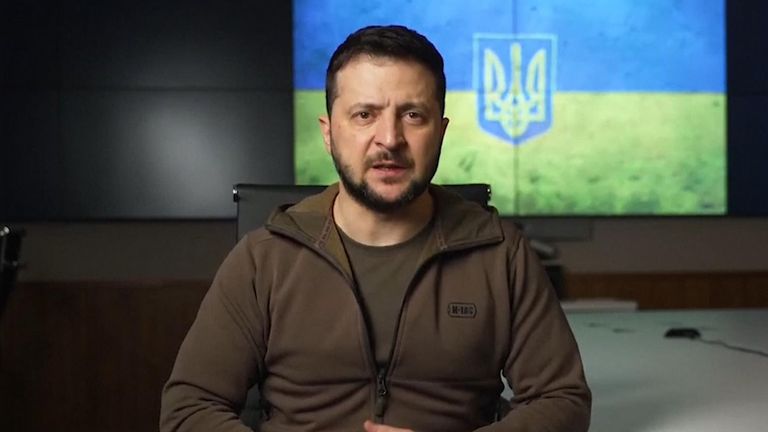 Speaking candidly, he acknowledged Ukraine’s military would not have defended Kyiv as successfully as it did in the first phase of the invasion without western weapons, such as anti-tank and anti-aircraft missiles.

“I say honestly no,” Mr Danilov said when asked directly if the defence of the capital would have gone as well without British, US and other allied nations’ lethal aid.

“We would resist but that would have been very, very difficult… Thanks to the effectiveness of these weapons and the braveness of our soldiers we pushed them out of Kyiv, Chernihiv and Sumy regions. And if they [Russia] is saying they withdrew by choice – that is not true.”

After the Battle for Kyiv, Russian forces retreated from the north, regrouped, and this week began a new offensive in the east, dubbed the Battle for Donbas.

It spans the regions of Donetsk and Luhansk, where Ukrainian troops have been fighting Russia-backed separatists since 2014. The eastern region of Kharkiv is also on the frontline.

Analysts have speculated that President Vladimir Putin may want to declare a win in Ukraine by Russia’s annual Victory Day on 9 May. It is the most important military day in the Russian calendar, marking the defeat of Nazi Germany in the Second World War.

Mr Danilov said the Kremlin would fail to achieve any kind of successes by that time if western allies keep up the flow of weapons to Ukraine.

“If this help continues, Putin will have nothing by 9 May,” he said. “There could be mourning instead in Moscow.”

In other comments, the top Ukrainian security official said Syrians hired by Russia to join the war in Ukraine have started to appear – and be killed – on the battlefield. Ukraine war: What happened on day 56?

Mr Danilov shared photographs that showed three dead fighters in military-style fatigues, with their faces clearly visible, along with a number of other indistinguishable bodies.

He said they were foreign fighters who had been killed in the Luhansk region.

An aide to Mr Danilov said the fighters were from Syria and Libya.

“There are a lot of them there and they continue to gather from all over the world,” Mr Danilov said.

Read more: The key battlegrounds in the Battle of the Donbas, Russia’s attempt to take east Ukraine

It was not possible independently to verify the claim, but Kremlin officials have previously announced plans to recruit up to 16,000 “volunteers” from the Middle East to join its war.

As for how many Syrians had been killed, Mr Danilov said: “It is difficult to say. We don’t count them. We don’t have enough time to count them… No matter how many they send here, they will all be killed.”

The security official said he did not feel fear in the face of the Russian threat – a fact he planned to tell his youngest of nine grandchildren, who was born this year.

“He will grow up and ask me: ‘Grandpa, when the war was happening were you scared?’ What should I answer? That I was afraid? No. They [Russia] should be afraid.”

Mr Danilov is also not afraid to show emotion.

Asked how he was still able to smile despite the pressure of being at war, he said: “Listen, what am I supposed to do, lay down and die? Life goes on.

“Yes we have some difficult times. You need to understand I am crying. I went to Chernihiv, to the border with Russia. The border point was totally destroyed. I cried there…

“We brought a new flag because the previous one was destroyed. Border soldiers who survived put the flag back up and they started to sing the anthem. People who survived that meat grinder, the first thing that they did was to sing the national anthem.”