Vladimir Putin has warned that any threats made by countries interfering in Russia’s invasion of Ukraine will be met with a “lightning-fast” reaction.

He said what he called the “special military operation” in Ukraine would “guarantee the safety” of people in the Donbas and Crimea.

He also had words of caution for the West, saying its plans to “strangle us economically have failed” – adding that any countries attempting to interfere in the conflict would face “quick” retaliation.

Meanwhile, Russia halted gas supplies to Bulgaria and Poland today via the Yamal-Europe pipeline for rejecting its demand for payment in roubles.

It is its toughest retaliation so far against international sanctions over the war, and comes as European countries have joined the US in ramping up arms shipments to help Ukraine fend off a new Russian assault in the east.

The gas cuts will not immediately leave the two countries in significant trouble since they have worked on obtaining alternative sources for several years and the continent is heading into summer, making gas less essential for households. 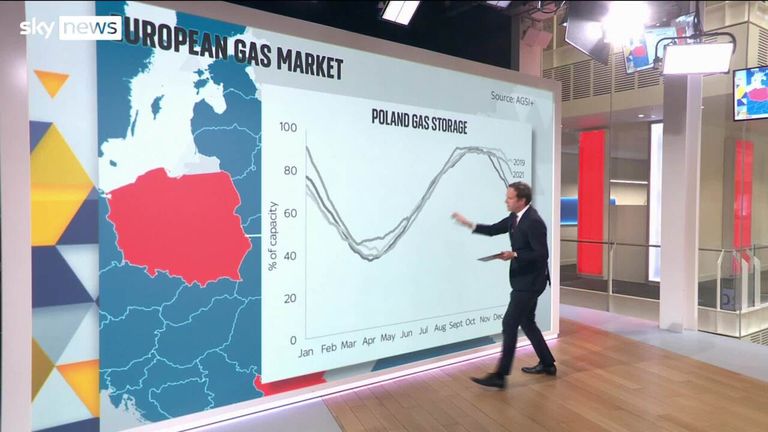 Previously, gas payments from Bulgaria and Poland have been made in euros. Although Russia has requested they now be made in roubles, both countries declined and they have now been cut off.

Although gas prices have risen as a result they have not risen as much as expected – as Poland’s gas storage is higher than in a normal year and new pipelines have also reduced the reliance on Russian oil.

EU chief Ursula von der Leyen said on Wednesday that Gazprom’s decision to halt gas supplies to Bulgaria and Poland is “another provocation from the Kremlin” and an “attempt to blackmail” European counties with gas.

The EU announced plans to cut Russian gas imports by two-thirds within a year with a longer-term goal of ending Russian energy imports – which currently hand Moscow €800m every day – by 2030.

On Tuesday, Moscow said it was effectively at war with NATO – warning that Western weapons are inflaming the conflict in Ukraine.

Russian Foreign Minister Sergei Lavrov said continual deliveries of supplies and weaponry to Ukraine means the NATO alliance has positioned itself as “in essence engaged in war with Russia” and accused the organisation of “pouring oil on the fire”.

The diplomat also warned against provoking a third world war and said the threat of a nuclear conflict “should not be underestimated”.

Fighting continues in the east

On the ground, fighting continued in eastern Ukraine along a largely static front line some 300 miles (480km) long.

The Russian defence ministry said its Kalibr missiles destroyed hangars in the Zaporizhzhia region which contained “a large batch of foreign weapons and ammunition supplied to Ukrainian troops by the United States and European countries”.

An ammunition depot in the Belgorod region, just across the border in Russia, was burning early on Wednesday after several explosions were heard, the governor said.

Explosions were also reported in Russia’s Kursk region near the Ukrainian border, as well as in Russia’s Voronezh region, with authorities saying an air defence system shot down a drone.

Earlier this week, an oil storage facility in the Russian city of Bryansk was engulfed by fire.

Ukrainian presidential adviser Mykhailo Podolyak hinted at the country’s involvement in the fires, saying in a Telegram post that “karma (is) a harsh thing”.

In other news, Russia has released former Marine Trevor Reed in a prisoner exchange with the US, his family and officials said.

“Today, our prayers have been answered and Trevor is safely on his way back to the United States,” his parents, Joey and Paula, and his sister, Taylor, said in a statement.

They added that Mr Reed, 30, will “tell his own story” when he is ready before asking for privacy to address “the myriad of health issues brought on by the squalid conditions he was subjected to in his Russian gulag”.