New satellite images of the Azovstal steelworks in Mariupol show how the site has been the target of extensive shelling over the course of the war.

The images, which were released by satellite imaging company Planet, show what the site looked like on eight separate dates, beginning on 10 March.

One of the images appears have captured the moment bombs hit the sea next to the plant, while more recent imagery from 3 May and 4 May show smoke rising from several areas of the plant.

Sky News has analysed the imagery and identified some of the damaged areas.

The Azovstal steel and iron works is a vast industrial complex that spans over four square miles in eastern Mariupol.

One of the main ways to access the site from the city is via two bridges over the Kalmius river.

The satellite images show that on 10 March, the bridges were intact.

But by 27 April, both of them had been completely destroyed.

Use the slider below to see the area before and after it was hit.

Large craters can also be seen around the entrance, indicating that it was the target of multiple attacks.

“Bridges and other crossing points are usually destroyed to prevent reinforcements coming in or to stop forces extracting from a given area,” Ed Arnold, a research fellow at the defence think tank RUSI, told Sky News.

“Either side, at one time or another in the battle for the steelworks might have decided to do that, or some crossing points might have been hit accidentally amongst the widespread shelling,” he said.

Satellite images appear to have captured the moment ordnance hit the sea next to the steelworks.

A workshop in the centre of the plant also appears to have been flattened by Russian shelling.

Use the slider below to see the area before and after it was hit.

In a satellite image captured on 30 March, each of the buildings appear untouched.

But in another captured on 27 April, all but one of the buildings has sustained severe damage.

Mr Arnold says that some of the larger buildings like the rail depot could have been targeted due to their usefulness to Ukrainian snipers.

“Snipers operate in tall buildings – not just for positions to fire from, but to also get good lines of sight across the steel plant for reconnaissance of Russian movements.” he said.

Some of the largest buildings in the steelworks are the mills and warehouses situated towards the centre of the plant.

Many of these have taken particularly heavy damage in recent weeks.

The images below show the buildings on 10 March and on 1 May.

Use the slider to see what they looked like on each of those days.

The warehouses appear to have been targeted in the initial stages of the war, but the damage is limited to the eastern section of the buildings on 10 March.

But by 1 May, almost every part of the building has been damaged.

Footage of the warehouses being bombed was shared on Donetsk People’s Republic social media channels earlier this week. 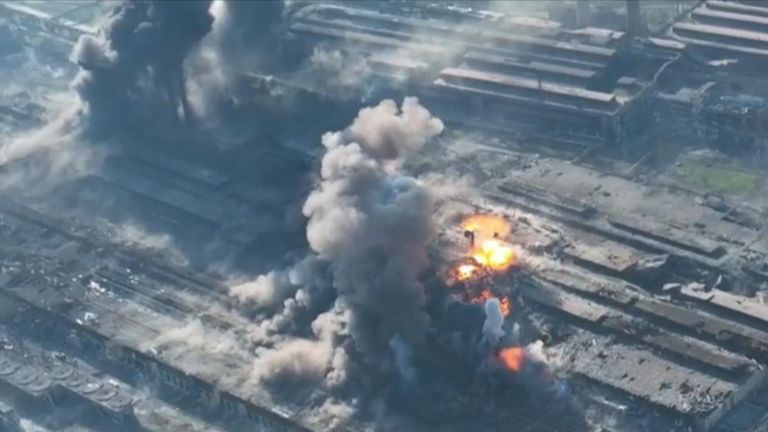 The destruction wrought by Russian forces against the Azovstal steel plant has been severe.

Mr Arnold feels the Russians may come to regret their tactics should they finally clear out the last of the Ukrainian defenders.

“The Russians need the Azovstal plant to work if they want to control and govern Mariupol going forward,” he said.

“It’s a large part of the city’s economy that the Russians will need to generate through other means if they can’t get it back operating due to its partial destruction.”

The Data and Forensics team is a multi-skilled unit dedicated to providing transparent journalism from Sky News. We gather, analyse and visualise data to tell data-driven stories. We combine traditional reporting skills with advanced analysis of satellite images, social media and other open source information. Through multimedia storytelling we aim to better explain the world while also showing how our journalism is done.