A Ukrainian military commander holed up inside Mariupol’s Azovstal steelworks has told Sky News that a Russian aerial bomb has hit a shelter in a makeshift hospital within the plant.

Speaking on a poor phone connection from within the steelworks, Major Serhiy Volyna, commander of the 36th Brigade of the Ukrainian Army, said an aerial bomb landed near the military hospital where hundreds of people were already being treated for wounds.

“The situation is difficult. About 600 people have wounds of different degrees of gravity. We have wounded civilians, 100 of them… [inaudible] more than 50 children and elderly people. As for medical support, it is absent. Last night, there was a direct hit by an aerial bomb on the shelter of the military hospital,” claimed the commander, who is with the Ukrainian marines.

On Tuesday, the Kremlin claimed that Russian President Vladimir Putin had told Turkish President Recep Tayyip Erdogan that no military operations were ongoing in Mariupol.

However, images emerging from the city and the interview with the Ukrainian commander suggest the Russian assault continues.

“I can say that the city is beyond the brink of a humanitarian catastrophe,” Major Volyna told Sky News.

He said: “It has been totally erased from the face of the earth. The Ukrainian garrison of Mariupol is holding defence lines at the Azovstal works and on the approaches to it. The rest of the territory is controlled by Russian troops.”

Giving further detail on the bombing attacks, he said: “Over the past night, there were more than 50 airstrikes. I am not even talking about ship-based artillery systems, based on Russian warships, from ground-based artillery.

“Tanks and other military equipment fire point-blank at residential areas, any buildings. The enemy is raising to the ground any infrastructure located in our area.”

Describing the damage to the medical facilities, he said: “The operation room was completely destroyed, just field conditions, we can no longer operate on the wounded. The situation is critical. Medical support is absent. The conditions in which servicemen and civilians, children and the elderly are trying to survive are simply horrible.” 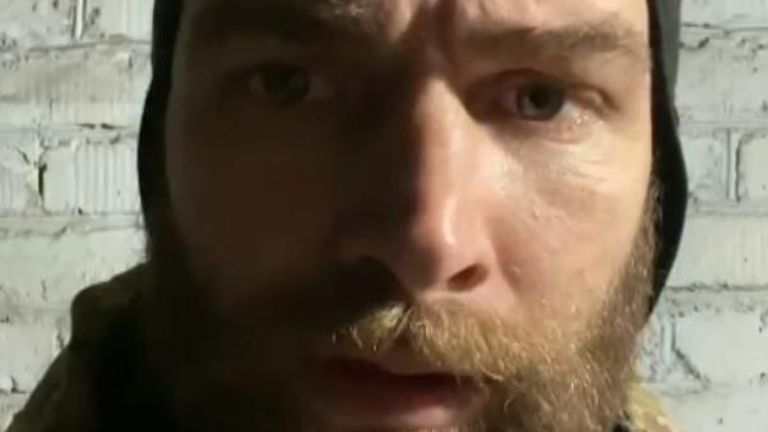 ‘We are outnumbered 10 to one’

There have been repeated attempts to secure a ceasefire in Mariupol. On a visit to Moscow this week, United Nations Secretary-General Antonio Guterres offered to work with the International Committee of the Red Cross to coordinate the evacuation of civilians.

Following what was described as a “very frank discussion” with President Putin, a UN spokesman said: “President [Putin] agreed, in principle, to the involvement of the United Nations and the International Committee for the Red Cross in the evacuation of civilians from the Azovstal plant in Mariupol.”

Major Volyna said his unit was asking for safe passage for all the civilians and for his men.

“We ask for a secure extraction to the territory of a third country from the city of Mariupol, to a territory where civilians, servicemen and wounded will be safe,” he said.

“We believe that a military operation would cause many victims and it would take a long time. We will suffer losses in wounded and dead.

“Since the international humanitarian law is being neglected… the wounded are not considered as combatants, they must be evacuated from the battlefield and must be provided with the necessary support, which is effectively not happening.”

According to the mayor of Mariupol, who is no longer in the city, more than 21,000 civilians have died in the city since the Russian assault began at the end of February.

Tanya Kozyreva in Ukraine contributed to this report