President Putin has said he wants a Mariupol steelworks that is the last stronghold of resistance in the city to be blockaded so that “a fly cannot pass through”.

He told defence minister Sergei Shoigu that a major attack on the Azovstal plant was not needed.

“I consider the proposed storming of the industrial zone unnecessary,” Mr Putin said. “I order you to cancel it.”

The southeastern city has been devastated by a near-constant bombardment since the war began – with an estimated 20,000 civilians killed.

Another 1,000 people are sheltering alongside Ukrainian troops at the steelworks. 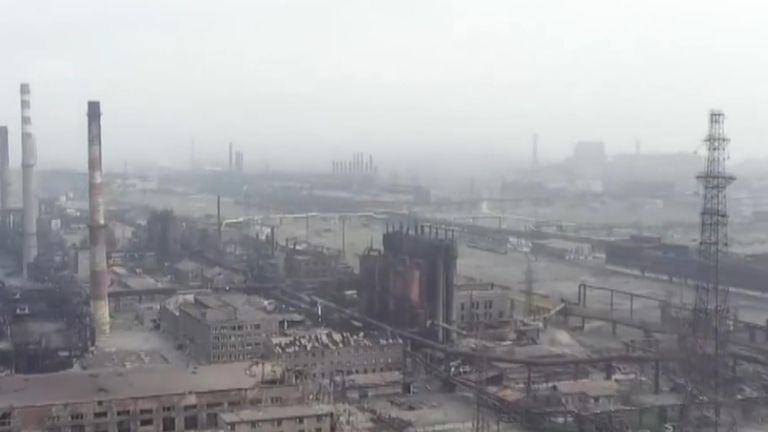 Mariupol troops ‘outnumbered 10 to one’

Mr Putin said he had decided not to storm the plant to protect the lives of Russian soldiers.

“There is no need to climb into these catacombs and crawl underground through these industrial facilities,” he told Mr Shoigu.

“Block off this industrial area so that a fly cannot pass through.”

He also called on remaining fighters in Azovstal to surrender, saying they would be treated with respect and get medical help.

“They physically cannot take Azovstal, they have understood this, they have taken huge losses there. Our defenders continue to hold it,” he said.

Capturing Mariupol would create a land bridge between Crimea, which Russia annexed in 2014, and the new heart of its invasion in the east.

It comes as President Biden announced a further $800m (£613m) of US weaponry – including howitzers, drones and 144,000 rounds of ammo – would be sent “directly to the front lines of freedom”.

Ukrainian marine commander Serhiy Volny has warned that fighters at the sprawling Mariupol plant may not be able to “hold out for much longer”.

He told Sky News that troops were “outnumbered 10 to one” and more than 500 fighters needed medical attention.

“The enemy units are dozens of times larger than ours, they have dominance in the air, in artillery, in ground troops, in equipment and in tanks,” he said.

Read more
Why is Mariupol so important to both sides? 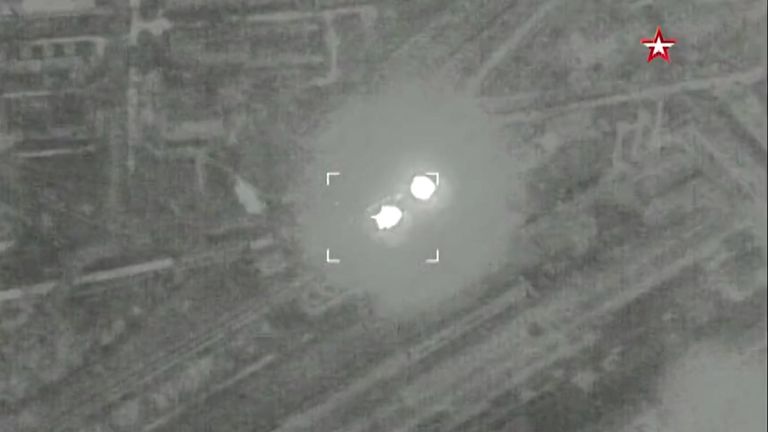 The situation in Mariupol has become so desperate that President Zelenskyy has proposed swapping Russian prisoners for a humanitarian corridor to allow civilians safe passage.

Ukraine is ready for a “special round of negotiations” with no conditions “to save our guys, Azov [battalion], military, civilians, children, the living and the wounded”, negotiator Mykhailo Podolyak said.

Four evacuation buses carrying around 80 civilians from Mariupol left the city on Wednesday, but tens of thousands are still trapped in the city with little food, water or access to medical aid.

The mayor of Ukraine’s second-largest city, Kharkiv, said it had come under intense bombardment as the battle for the eastern Donbas region escalates.

Russian forces and Russian-backed separatists have also taken full control of the town of Kreminna.

The governor of Luhansk, part of the Donbas, has claimed Russian forces now control 80% of his region.

Serhiy Haidai said cities such as Rubizhne and Popasna were now under threat.

“The occupiers control only parts of these cities, unable to break through to the centres,” Mr Haidai said on messaging app Telegram.

Analysts have said the east could become a war of attrition as Russia faces Ukraine’s most experienced troops, who have fought pro-Moscow separatists in the Donbas for eight years.

Read more:
Why is Russia focusing on the east?

Only a miracle could stop fall of Mariupol

A decision by Vladimir Putin to cancel plans to storm the last stronghold of resistance in Mariupol means the Ukrainian city has not completely fallen to Russia but – short of a miracle – that must only be a matter of time.

The Russian president has instead ordered that a blockade be maintained around a sprawling steelworks, where thousands of Ukrainian fighters and hundreds of civilians are holed up, so that not even a fly can escape.

It signals a cruel final stand for Ukrainian defenders who have withstood almost two months of sustained bombardments, though it does rob – or at least delay – the Kremlin from being able to declare the strategic port city is fully under Russian control.

Ukraine’s government is trying to secure safe passage for its people but there is no sign they can convince Russia to let them escape.

The seemingly inevitable fall of Mariupol would mark the most significant capture of a Ukrainian city since the invasion began, with Russian forces thought to be seeking to secure successes ahead of annual Victory Day on 9 May, commemorating the end of the Second World War.

However, the seizure of the city, which once had a population of almost half a million, has come at a devastating cost for its residents. More than 20,000 civilians have been killed, many more wounded and hundreds of thousands have fled.

Mariupol itself has been all but flattened.

$800m of military aid going ‘directly to the front lines’

The president said it included dozens of howitzer guns, 144,000 rounds of ammunition and tactical drones.

Mr Biden said America and allies were “moving as fast as possible” to give Ukraine the weapons it needs.

“We’re in a critical window now of time where they’re going to set the stage for the next phase of this war,” the president said.

The military aid is the same size as another package announced last week, and America has so far promised over $2bn of military aid.

The president said Mr Putin was “banking on us losing interest” and that “Western unity will crack”, but that “once again we’re going to prove him wrong”.

British prisoners ‘being taken care of’

“Don’t worry, the Russian side is taking care of them,” said spokeswoman Maria Zakharova.

“They are fed, watered, and given the necessary assistance. Just like other foreigners who have surrendered or been detained.”

The men were seized by Russian forces and appeared on state TV, where they asked to be exchanged for a Ukrainian ally of President Putin.

Shaun Pinner and Aiden Aslin asked to be swapped for Viktor Medvedchuk, who is being held by the Ukrainian authorities.