Russian military leaders are as much to blame for the Ukraine invasion as President Vladimir Putin – and both should face consequences, the UK defence secretary has said.

In a major speech today, Ben Wallace is expected to not mince his words, and tell the world bluntly, that Mr Putin and his inner circle should share the same fate as the Nazis, who ended up defeated and facing the Nuremberg trials for their atrocities.

It comes as President Putin prepares to stage a military parade to celebrate Victory Day in Russia, marking the defeat of Hitler’s fascists in 1945.

According to extracts briefed to the Telegraph and Times, Mr Wallace will say: “Through their invasion of Ukraine, Putin, his inner circle and generals are now mirroring the fascism and tyranny of 70 years ago, repeating the errors of last century’s totalitarian regimes.”

He will add: “Their fate must also, surely, eventually be the same.”

• Evacuation efforts continue from Mariupol’s bombed-out steel plant
• In a video call, G7 leaders reiterate their support for Ukraine in a show of unity the day before Russia marks its Victory Day holiday.
• UK announces fresh Russia sanctions targeting £1.7bn worth of trade
• US First Lady Jill Biden makes an unannounced visit to western Ukraine and shares an emotional embrace with her Ukrainian counterpart Olena Zelenskyy
• Daughters of Paul Urey, a British aid worker captured in Ukraine, tell Sky News they are “preparing for the worst”.
• Bono performs at a metro station in Kyiv as a “show of solidarity”

Before his audience at the National Army Museum in London, he is expected to say: “Their unprovoked and illegal invasion of Ukraine, attacks against innocent citizens and their homes, and the widespread atrocities – including deliberately against women and children – corrupts the memory of past sacrifices and Russia’s once-proud global reputation.”

He will also criticise the behaviour of Russian commanders for war crimes and their incompetence in a campaign which has failed to secure the gains expected by Mr Putin by saying the generals in their “manicured parade uniforms” are “utterly complicit in Putin’s hijacking of their forebears’ proud history” of resisting fascism.

“All professional soldiers should be appalled at the behaviour of the Russian army,” Mr Wallace will add.

“Not only are they engaged in an illegal invasion and war crimes, but their top brass have failed their own rank and file to the extent they should be court-martialled.”

Read more:
Eyewitness: Searching for family in the rubble of Borodyanka
Why is Russia using the letter Z and what does it mean?
Night ambushes on quad bikes and drone attacks – how Russia’s invasion was held back

The defence secretary’s words will come after another relentless day of attacks in Ukraine.

At least 60 people were feared dead under rubble after a Russian bomb hit a school in eastern Ukraine.

Almost 100 more were cowering in the building when the attack was unleashed, causing a fire to engulf it.

Meanwhile, in the southern port city of Mariupol, Ukrainian fighters at the Azovstal steel plant have vowed to continue their stand as long as they are alive.

“We will continue to fight as long as we are alive to repel the Russian occupiers,” captain Sviatoslav Palamar, a deputy commander of Ukraine’s Azov Regiment, told an online conference.

Some of those inside, however, had raised criticisms of the Ukrainian government, saying it had failed to defend Mariupol better at the start of the invasion.

But when questioned about this by Sky’s security and defence editor Deborah Haynes, Ukrainian President Volodmyr Zelenskyy, stressed it was “impossible” for his troops to use military force to unblock the standoff without more heavy weapons.

“Ukraine does not have such heavy weapons to unblock Mariupol by military means,” he said. 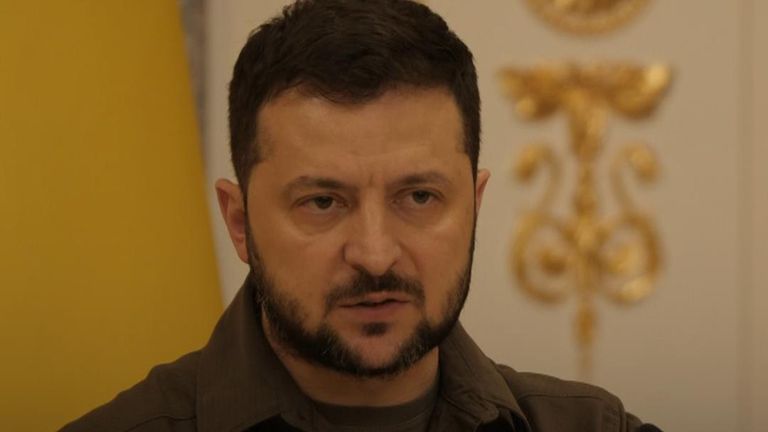 Hundreds of people had originally been trapped inside the plant for up to two months but around 200 have managed to escape. The city is now under mostly Russian control.

On the diplomatic stage, leaders from the Group of Seven (G7) pledged on Sunday to phase out or ban the importation of Russian oil.

Cutting out Russian oil supplies “will hit hard at the main artery of Putin’s economy and deny him the revenue he needs to fund his war,” the G7 countries, which include the US, Britain, Canada, Germany, France and Italy and Japan, said in a statement.

“We will ensure that we do so in a timely and orderly fashion, and in ways that provide time for the world to secure alternative supplies,” they added.

The US also announced a raft of new sanctions against Russia including cutting off Western advertising from Russia’s three biggest television stations, banning US accounting and consulting firms from providing services to any Russian and more restrictions on Russia’s industrial sector.

These included cutting off Moscow from wood products, industrial engines, boilers and bulldozers.