Ukraine will be most interested in what was not said when Vladimir Putin spoke at Russia’s annual Victory Day parade rather than his actual words.

The apparent absence from the pomp and ceremony of General Valery Gerasimov, the head of the Russian armed forces, will also be of note given the 9 May spectacle on Red Square is the most important date in the military calendar.

Ukrainian officials and their Western allies believe President Putin had been planning to use Monday’s ceremony as a moment to celebrate a great triumph from his war in Ukraine, with the collapse of the government in Kyiv and the installing of a pro-Moscow regime.

However that aspiration failed in the first weeks of the invasion when Russian forces were pushed back from an attempt to storm the capital.

It means there has been mounting speculation about what – if anything – Mr Putin would do when Russia commemorated its defeat of the Nazis in the Second World War.

Some officials had wondered whether he would talk up limited gains by his forces in the south and east of Ukraine.

There was also the chance he could declare Russia is at war with its neighbour, ditching the description of “special military operation”, and order a general mobilisation.

Instead, there were no such new announcements, just a doubling down on his old positions and without any new, overt threats against the West. 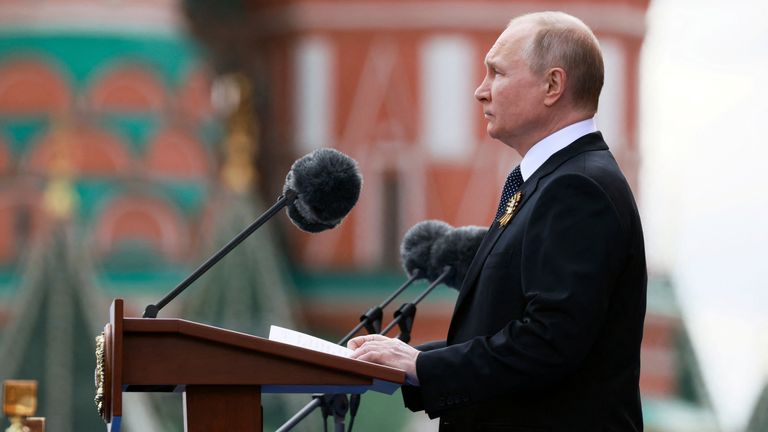 Vladimir Putin speaks during a huge military parade in Moscow

President Putin repeated his false justifications for sending Russian forces to fight and die in Ukraine on 24 February, accusing the Ukrainian government as well as the United States and its NATO allies of being the aggressors and an existential threat to Russia’s security.

He also told his troops, who were out in force on Red Square, that they are fighting for their country in as important a struggle as their predecessors who triumphed against the Nazis in the Second World War.

And Mr Putin paid his respects to all those Russian troops who have died in Ukraine, though he never referred to the country by name.