Second-half substitute Wilfried Zaha scored a stoppage-time winner as Crystal Palace came from behind to beat Southampton 2-1 at St Mary’s.

Rested after what Palace boss Patrick Vieira described pre-match as a physical game against Leeds on Monday, Zaha came off the bench in the 64th minute before rifling home in the 92nd to give his side all three points.

Oriol Romeu gave Southampton the lead early in the first half with a thumping header that bounced in off the underside of the bar (9), but Eberechi Eze levelled for Palace on the hour mark with a left-footed strike that snuck under Fraser Forster.

As the game looked to be heading for a draw, up stepped Zaha, who held off Jan Bednarek on the edge of the box before creating some space and firing a fine low drive in off the post. It was the Palace forward’s 13th goal in all competitions this season.

“He’s a special talent,” Vieira said. “He can score goals and has an impact on games. That is what you want from a leader of the group.

“When he’s on the field, there’s no doubt we’re stronger, but he needs his team-mates around him as well to perform at a good level so he can score those goals.”

The result sees Palace move up to 12th in the Premier League table. Southampton drop two places to 15th after suffering their sixth defeat in nine league games.

Man of the match: Wilfried Zaha.

Vieira had left Zaha on the bench after a bruising encounter at Leeds in the Eagles’ last outing, but he came on for the final 25 minutes to remind everyone just how indispensable he is to the club.

Romeu had missed two excellent-headed chances in Southampton’s recent defeat at Burnley but scored one here from James Ward-Prowse’s inswinging corner in the ninth minute.

The Spaniard rose above Joel Ward at the far post to head in off the crossbar and give Ralph Hasenhuttl’s side the lead.

Neither Zaha nor Tyrick Mitchell were fit enough to start the game and they struggled to find openings in the early stages.

They did threaten after 25 minutes as Eze and Jeffrey Schlupp combined to create a chance for Jean-Philippe Mateta, whose near-post shot was saved by the legs of goalkeeper Fraser Forster.

With the primary objective of survival already achieved, the pressure was off both sides, making for an open game.

Conor Gallagher and Ward-Prowse may well end up competing for the same place in Gareth Southgate’s World Cup squad and both were prominent.

Gallagher broke well towards the end of the first half and Ward-Prowse did just enough to deflect his dangerous cross onto the roof of the net and prevent the ball from reaching the unmarked Mateta.

Forster, soon to be out of contract at Southampton, was then needed to make a smart save as Jordan Ayew headed Eze’s corner towards the top corner.

Southampton manager Ralph Hasenhuttl made one change from the side that started last weekend’s 2-2 draw at Brighton. Romain Perraud replaced Tino Livramento, who suffered a serious knee injury in that game.

Crystal Palace boss Patrick Vieira also made one change from the team that began Monday night’s 0-0 draw with Leeds. Jeffrey Schlupp was named in the starting XI in place of Wilfried Zaha, who was on the bench.

Vieira confirmed before kick-off that Zaha was being rested after a physical game at Selhurst Park.

After a slow start, it was Palace who now looked the more threatening.

Five minutes after the break, Ayew got to the byline and Forster pushed away his cross, with Schlupp seeing a point-blank shot blocked by defender Jan Bednarek.

They deservedly equalised when Ayew fed former Saints full-back Nathaniel Clyne and his deep cross was volleyed low between Forster’s legs by Eze.

It was Eze’s first goal since tearing his Achilles last May, with the former QPR player having struggled to regain his place since returning from injury in November.

Vieira introduced Zaha from the bench as Palace looked for a winner.

They had strong penalty claims waved away when Gallagher went down under Romeu’s awkward challenge.

Hasenhuttl responded by bringing on Armando Broja and Stuart Armstrong and the latter might have won it when he blazed over after Romeu’s flick had found him in the six-yard box.

But as the game appeared to be petering out, a moment of magic from Zaha saw Palace leave St Mary’s with all three points. 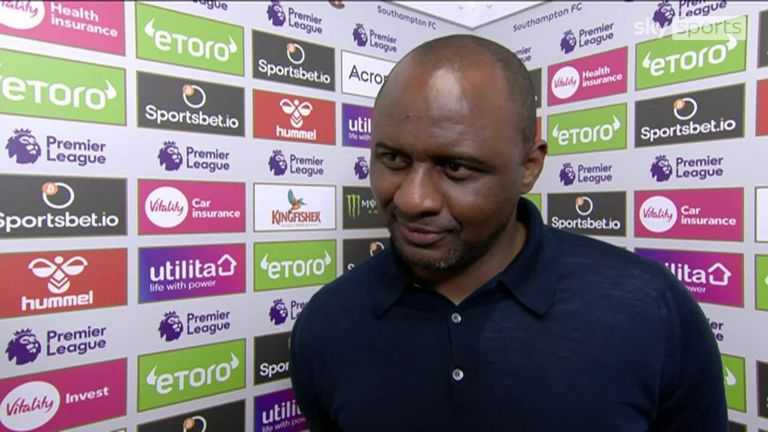 After Crystal Palace came from behind to win for the first time this season, Patrick Vieira praised the character of his players.

He said: “I really enjoyed it because going in 1-0 down at half-time, we didn’t deserve that, and we came back in the second half a bit quicker in our passing and we managed to score those two goals.

“The game against Leeds was in our legs, especially Wilfried, and the plan was for him to come on and I think it’s important for players to understand that we are a team and everyone has an important role to play.”

Vieira was also delighted for Eze, who has struggled to regain his place since returning from an Achilles tear in November, adding: “It was a long journey for Ebs and I’m really pleased for him because being out for seven months is really challenging.” 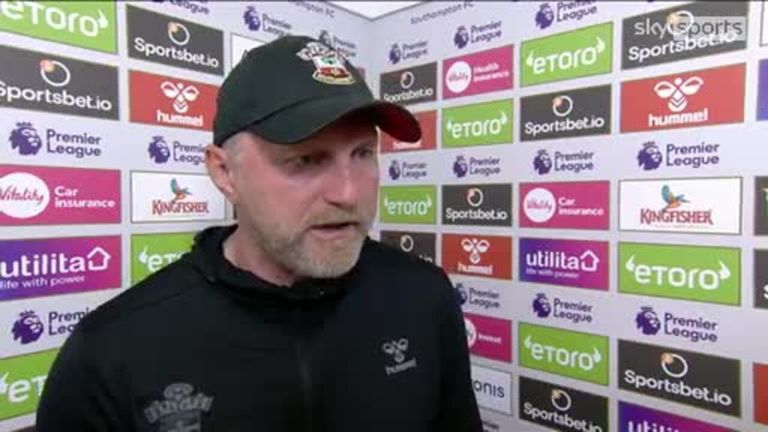 Southampton manager Ralph Hasenhuttl was critical of his side’s defending

The result means Southampton have now won just once in 12 games and hopes of a top-half finish are rapidly fading for Ralph Hasenhuttl.

“When you see how we concede the first goal, how easily you give it away, we are in some positions at the moment lacking quality,” said the Saints boss.

“Always when we are in the position to make this next step we fail, and maybe we fail because we are not good enough.”

After Saturday’s 2-1 comeback win over Southampton, Crystal Palace have their sights firmly set on a top-half finish in the Premier League for the first time since the 2014/15 season. With four fixtures remaining, the Eagles are two points behind 10th-placed Newcastle with a game in hand.

It has been a brilliant start to life at Selhurst Park for Patrick Vieira. Following a run of one point from three league games, either side of an FA Cup semi-final defeat by Chelsea, Palace’s campaign had threatened to fizzle out, but Wilfried Zaha’s late winner at St Mary’s summed up the feel-good factor under the former Arsenal captain.

Palace ended the 2020/21 season fielding the oldest average line-up of any Premier League club, but the likes of Eberechi Eze, Michael Olise, Marc Guehi, and the impressive Conor Gallagher – on loan from Chelsea – have brought some youthful exuberance to south London.

Every young side needs to be balanced with experience though and Zaha, if he stays, showed he might just be capable of leading this group of players into the next stage of Vieira’s long-term project.

Palace are far from perfect, but they are now playing an attractive brand of football and the excitement at the club is building. Those supporters who travelled down to the south coast on Saturday never stopped singing and never stopped believing. They’ve loved every minute of this entertaining season.

Southampton travel to Brentford next Saturday in the Premier League before hosting Liverpool on May 17, live on Sky Sports. The Saints then go to Leicester on the final day.

Up next for Crystal Palace is Watford at home next Saturday. The Eagles then travel to Aston Villa and Everton before hosting Manchester United on the final day of the season.