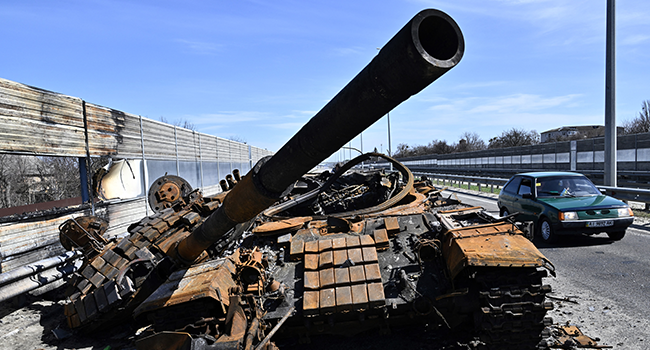 Russia renewed air strikes on Kyiv on Saturday, as President Volodymyr Zelensky warned that peace talks with Moscow will be scrapped if the last Ukrainian troops in the besieged port city of Mariupol are killed.

The fresh bloodshed in Ukraine’s capital and the mounting pressure on Mariupol came as Austria’s chancellor, the first European leader to meet with Vladimir Putin in person since the invasion began, said he thought the Russian president “believes he is winning the war”.

The attacks on Kyiv ended weeks of relative calm in the city.

Smoke rose from the Darnyrsky district in the southeast of the capital after what Moscow said were “high-precision long-range” strikes on an armaments plant, killing one person and wounding several others.

A heavy police and military presence was deployed around the factory, which was badly damaged.

“Our forces are doing everything possible to protect us, but the enemy is insidious and ruthless,” Kyiv Mayor Vitali Klitschko said.

The strike came a day after a similar attack on a plant that produced Neptune missiles — the type which, according to Kyiv and Washington, sunk Russia’s Black Sea flagship Moskva on Thursday.

It was among the first attacks since Russian forces began withdrawing from that region last month, instead turning their focus on gaining control of the eastern Donbas region, for years controlled in part by pro-Russian separatists.

Kyiv regional governor Oleksandr Pavliuk said there were at least two other Russian strikes on the city Friday and that civilians thinking about returning should “wait for quieter times”.

Nevertheless, families and off-duty soldiers were out in the parks of central Kyiv on Saturday, bringing a semblance of normality to the once-bustling city.

“It’s the first time we’ve been back in the city centre… It’s really making me happy to see people out and about,” 43-year-old vet Nataliya Makrieva told AFP.

Meanwhile, in Ukraine’s second-largest city Kharkiv, in the northeast of the country, a Russian missile strike on a residential district killed at least two people on Saturday and wounded 18 others, the public prosecutor’s office said.

And Ukrainian Interior Minister Denys Monastyrsky said three people were killed and four others critically wounded in a demining operation near Kharkiv.

In the south, the devastated city of Mariupol has become a symbol of Ukraine’s unexpectedly fierce resistance since Russian troops invaded the former Soviet satellite state on February 24.

Russian officials now say they are in full control there, though Ukrainian fighters remain holed up in the city’s fortress-like steelworks.

“Their only chance to save their lives is to voluntarily lay down their arms and surrender”, Russian defence ministry spokesman Igor Konashenkov said Saturday.

As the Russian forces close in, Zelensky issued a warning.

“The elimination of our troops, of our men (in Mariupol) will put an end to any negotiations,” Zelensky told the Ukrainska Pravda news website.

“We don’t negotiate neither our territories nor our people.”

The peace talks already appeared moribund, having produced little since they began, and Putin said days ago he believed they were at a “dead end”.

Austrian Chancellor Karl Nehammer, who met Putin on Monday in Moscow, said he thinks the Russian president believes the war is necessary for his country’s security.

“I think he is now in his own war logic,” Nehammer said in an interview with NBC’s “Meet the Press”, portions of which were released Saturday. “I think he believes he is winning the war.”

Nehammer met Putin before the sinking of the Moskva, its Black Sea flagship, in what the Pentagon confirmed was a Ukrainian missile strike — a serious blow to Russia’s war effort.

On Saturday, the defence ministry in Moscow released a 30-second video it said showed rescued crew members meeting with the head of the navy — the first purportedly showing Moskva survivors.

Russia claims the guided missile cruiser sank after a fire onboard sparked by a munitions explosion, and that all members of the crew of more than 500 were rescued.

Amid escalating tit-for-tat sanctions since the invasion began, Russia said Saturday it was banning entry to British Prime Minister Boris Johnson and several other top officials.

The foreign ministry accused London of “unprecedented hostile actions”, in particular referring to sanctions on senior Russian officials, and “pumping the Kyiv regime with lethal weapons”.

Johnson paid a surprise visit to Kyiv a week earlier, and was filmed walking through the capital’s empty streets with Zelensky.

Britain has been part of an international effort to punish Russia with asset freezes, travel bans and economic sanctions, while several Western countries have supplied Ukraine with extensive weaponry.

Russia warned the United States this week of “unpredictable consequences” if it sends its “most sensitive” weapons systems to Ukraine.

Its defence ministry claimed Saturday to have shot down a Ukrainian transport plane in the Odessa region, carrying weapons supplied by Western nations.

Zelensky meanwhile issued a fresh warning about the possibility of Russia using nuclear weapons as the conflict wears on.

‘No home to return to’

Russia has said its losses were far smaller.

Zelensky said that around 10,000 Ukrainian soldiers had been wounded.

Russia’s apparent new focus on seizing the eastern Donbas, where Russian-backed separatists control the Donetsk and Lugansk areas, would allow Moscow to create a land corridor to occupied Crimea.

Ukrainian authorities have urged people in the region to quickly leave ahead of what is expected to be a large-scale Russian offensive.

In Geneva, the UN refugee agency warned that many of the nearly five million people who have fled Ukraine will not have homes to return to.

“For so many, there is no home to return to since it’s been destroyed or damaged, or is located in an area that is not safe,” said Karolina Lindholm Billing, UNHCR’s representative in Ukraine.