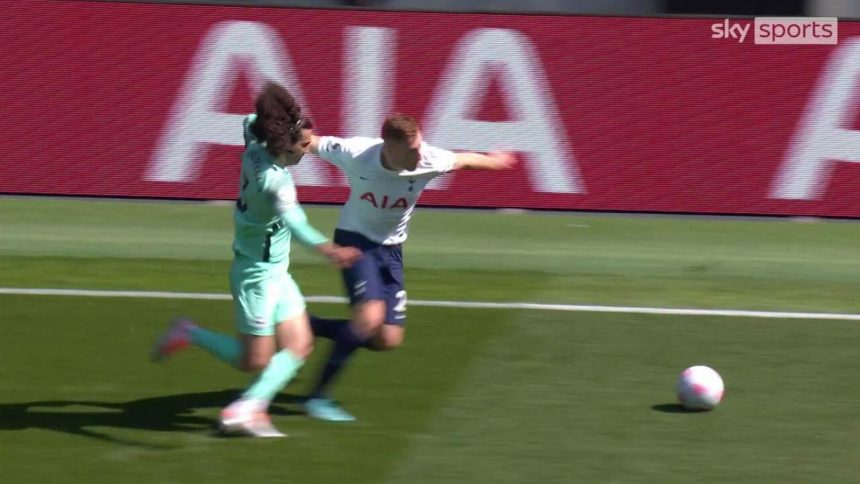 Dermot Gallagher dissects the big flashpoints from the weekend’s action and discusses whether Tottenham’s Dejan Kulusevski have been sent off during his side’s defeat to Brighton? 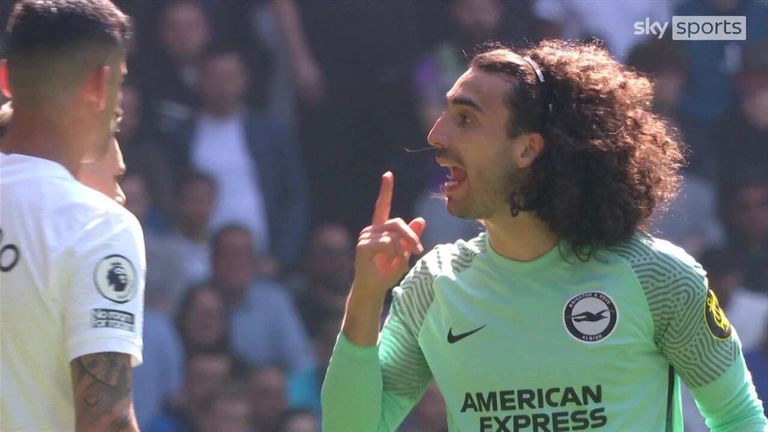 INCIDENT: Dejan Kulusevski swung an elbow at Marc Cucurella in the first half. The Spurs forward did not connect with the Brighton player. Referee Craig Pawson produced a yellow card for Kulusevski.

Cucurella has tried to wind him up and I think there’s been a reaction. I think he’s a very lucky boy.

DERMOT SAYS: “I never once thought, when I watched it, that he would get sent off. I think he reacts stupidly really when you look at it because he does run a risk, but I think he throws his arm back more in petulance. It’s a get off me. It’s not thrown back with the crook of the elbow or as a weapon, and it does not hit him in the face. It’s not done with real malice, so I thought a yellow card was right. I thought the referee judged it right.

“A lot of other people thought it was a red card but for me, I just didn’t think it was.

“He does throw his arm back, it is aggressive, but I didn’t think it was violent. I do think he was lucky. He has run a massive risk, there’s no doubt about it. It’s one where you have to judge what the referee sees and what he does, and the VAR looked for a long time and felt the same.”

INCIDENT: Enock Mwepu was walking a tightrope after going into the book himself for a trip on Sergio Reguilon and escaped a second yellow despite being penalised for a high boot against Ben Davies and stepping on Pierre-Emile Hojbjerg’s foot with a clumsy challenge.

VERDICT: Mwepu lucky not to get second yellow card

DERMOT SAYS: “I don’t think that’s a red card [for Mwepu’s high boot]. They clash but what happens there is if the referee had pulled him out – because he did already have a yellow card at this point – and said that’s it, then what happens a few minutes later would have been much easier for the referee.

“The one he was booked for was an identical challenge to the one on Hojbjerg.

When it happened, I thought he’d be sent off because they are the same. I go back to the other one, if he’d set him up, so to speak, then when the second challenge comes along, he’d give him a second yellow card and then everyone would be thinking well what does Mwepu expect. He’s just been warned.” FREE TO WATCH: Highlights from Brighton’s win against Tottenham in the Premier League

While chances were in short supply at either end, there was first-half controversy when Spurs’ Dejan Kulusevski swung an elbow at Marc Cucurella and was only booked, and Brighton’s Enock Mwepu, who had already been shown a yellow card, escaped further punishment when he was penalised for a high boot on Ben Davies and stood on Pierre-Emile Hojbjerg’s boot.

Tottenham lost Matt Doherty for the season during last week’s win at Aston Villa when he suffered a medial collateral ligament injury from a tackle from Matty Cash and Conte says officials must be alert to moments when players take man and ball in tackles.

“Sometimes I think the referee has to pay more attention to protect players,” Conte said in his post-match press conference, when asked whether about Doherty and ‘big tackles’ from Brighton. “I understand you go and you take the ball but if you go to take half ball and half body and you make damage to the player, it’s not the same.

“I think for the safety of the player, the referee has to pay great attention, to understand. If you go to take the ball but when you take the ball and the body and you make damages to your opponent, I think you have to make a big punishment.

Asked about the Kulusevski incident, Conte said: “Honestly I didn’t see. I’m going to see what happened. I think maybe also during the game maybe other players deserved the second yellow card for Brighton. But the referee decided in this way and we have to accept the decision of the referee.”

On the possibility of Brighton players slowing down the match at free-kicks, Conte added: “This type of situation referees need to be more good. It’s normal if you are playing and you know that you can get one point – at the end, they got three points – you understand sometimes you have to lose the intensity of the game and with a player to stay lying down. But I think the referees, they have to try to give continuity and don’t break the intensity of the game with fake injuries.” 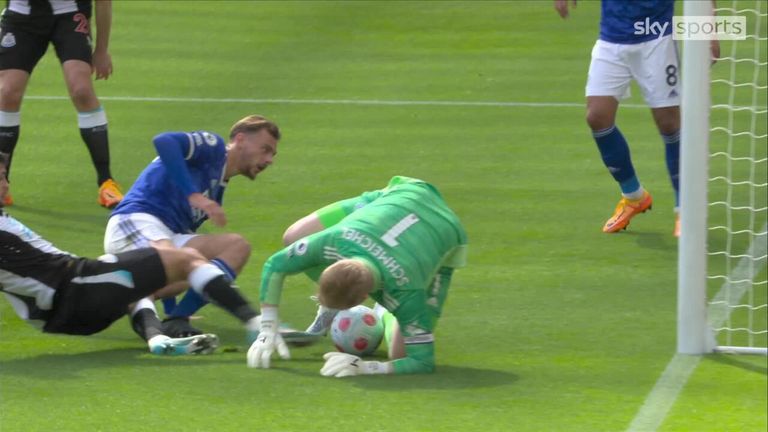 INCIDENT: After the visitors had failed to clear Jonjo Shelvey’s corner, Bruno Guimaraes was able to twice poke the ball towards goal at the back post, his second effort rolling in through the legs of Kasper Schmeichel.

Referee Jarred Gillett initially penalised Guimaraes for a foul, but a VAR review determined Leicester goalkeeper Schmeichel did not have the ball in his hands and the decision was correctly overturned as the Foxes conceded from a set-piece for the 17th time this season.

FREE TO WATCH: Highlights from Brighton’s win against Tottenham in the Premier League

That’s the brilliant use of VAR.

“The VAR was really good there because when it happened the goal was immediately disallowed. The VAR straight away said don’t restart because I need to check this. He looked at it a couple of times and there was no foul. He told the referee to go and look at the screen because in the VAR’s opinion, there is no foul.

“It was a good team process.”