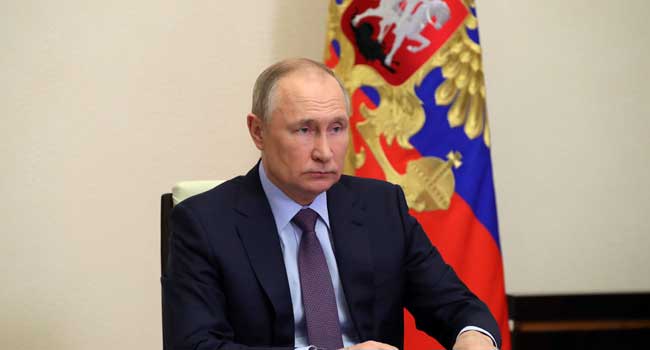 Russian President Vladimir Putin on Monday bestowed an honorary title on a brigade accused by Ukraine of “war crimes” and mass killings in the town of Bucha.

The announcement was made on the 54th day of Moscow’s military campaign in Ukraine, with thousands killed and 12 million people fleeing their homes or country in the biggest refugee crisis in Europe since World War II.

A decree signed by Putin gave the 64th Motor Rifle Brigade the title of “Guards” for defending the “Motherland and state interests” and praised the “mass heroism and valour, tenacity and courage” of its members.

In early April, the Ukrainian defence ministry said the unit occupied the town outside the capital Kyiv and committed “war crimes”.

The Ukrainian defence ministry’s Intelligence Directorate published the names, ranks and passports details of members of the brigade, saying they will face justice.

After the departure of Russian troops, bodies of men dressed in civilian clothes, some with their hands tied, were found scattered in the streets, according to AFP.