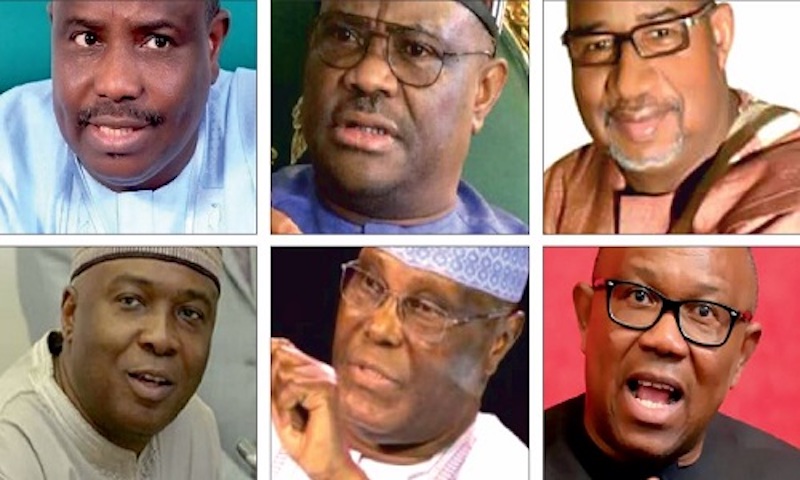 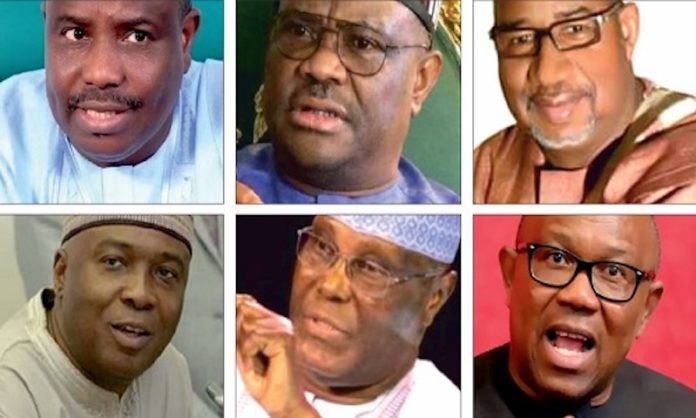 With less than three weeks to the presidential primaries of the People’s Democratic Party, PDP, aspirants are still crisscrossing the country, trying to woo delegates. Here is a pool at the top five contenders for the ticket, based on reactions to their visits and responses to their messages across Nigeria. Samuel Ajayi reports

Among the presidential contestants in both the ruling All Progressives Congress, APC, and the opposition PDP, the only one who could be described as a veteran of many political, especially presidential, contests is no other person than former Vice President Atiku Abubakar. Atiku’s first try was in 1993 when he contested for the presidential ticket of the then Social Democratic Party, SDP.

He political mentor, the late General Shehu Musa Yar’Adua, had been banned from contesting following the crisis that came with the staggered presidential primaries of 1992 when he (Yar’Adua) was tugging it out with former Minister of Finance, Chief Olu Falae. Atiku lost but he remained undaunted until he became the Vice-President in 1999 having been already elected as the governor of Adamawa State.

With the governorship mandate in the bag, then candidate Olusegun Obasanjo picked him as his running-mate for the 1999 presidential election and that was how he started his political journey as an elected political office holder.

He was to fall out with his then boss, Obasanjo, in the build-up to the 2003 general elections. While Obasanjo retained him as his deputy, trust had been severely injured between them as Obasanjo only retained him for political expediency. Atiku was not only planning to upstage his boss, he was said to have set up structures to contest the 2003 presidential ticket with his boss; with many then PDP governors said to be behind him.

He was denied the 2007 PDP ticket and he moved to the now defunct Action Congress of Nigeria, ACN, to contest where he was roundly trounced by the late President Umaru Musa Yar’Adua. In 2011, he did everything to pick the PDP ticket but was also beaten to it by former President Goodluck Jonathan.

Apart from criss-crossing the two major parties between 2014 and now, he is the only contestant with a political structure that has a national spread. And it is also believed he has enough resources to prosecute his political adventures, especially as they relate to the battle for the ticket of the PDP. Beyond this, he is the most experienced politician among the lot. On paper, analysts will think the PDP presidential ticket is for him to lose.

But it is not that simple. By the time the 2023 election is taking place, Atiku would have passed the age of 76. That is not a young age. While age does not matter, the guile, poise and energy he possessed 20 years ago could not be said to be the same with what he possesses now at the age of three scores and sixteen. ‘

Apart from age, many are also of the opinion that he ought to have retired from active politics since it seems his lifelong ambition of becoming the president of the country might not be materialising after all. Above all this, his critics and even neutrals believe he has much political baggage opponents can dig up and use against him ahead of the general election.

Mohammed Hayatu-deen: Where Structure is Limited, Credibility Fills In

In fact, the one that conveniently be called the only green horn in the PDP so far, Mohammed Hayatu-deen, former banker and tested technocrat, seems to be undaunted by that toga. In fact, perhaps, the thinking in his camp seems to be that the more he is seen as an underdog, the more he digs in and make forays into areas considered the strongholds of his potentially better politically equipped opponents.

Few weeks ago, many could have sworn that they did not know that the former managing director and chief executive officer of the now defunct FSB International Bank was contesting. But the upsurge in his rating and mention within political circles are results of what few weeks could change in political calculations. Even his staunchest of supporters know that he does not have the kind of political experience the likes of Atiku have.

He does not even come near it as this is the first time he would be coming out of corporate nest to throw his hat into the ring. But he seems to be making up for this by taking his message to those that matter within the party since he has to pick the party’s ticket first before thinking of how to deal with the challenge from the opposition.

Hayatu-deen, apparently aware that there is no any political structure anywhere that would work for him without prompting, he took his political destiny into his hands by visiting those who will decide where the PDP ticket would go: delegates. He has visited virtually all the northern states where he has met with delegates, party leaders and delegates telling them time has come for them to test a new hand with the ticket of the party.

He has visited Taraba, Benue, Niger, Kaduna, Borno, Adamawa, Gombe, Bauchi, Sokoto and so on. Sources close to his camp say he will start the southern states next week. Hayatu-deen might actually be a green horn politically, but he has one thing gong for him which is credibility. And that is very key. Perhaps, it is a plus for the opposition PDP that for the very first time, it has a tested technocrat and a former top banker as part of its presidential gladiators.

Morakinyo Ezekiel, an estate agent based in Lagos and political commentator, who says he has been following Hayatu-deen since when his father was working at FSB International Bank, said his father had always spoken highly of the respected technocrat.

“My father said he was a very good leader who would never joke with the welfare of workers. He gave them a sense of belonging. My father had been there before he came in but he changed the place. I was so excited when I read that he was contesting for the Presidency. I pray they give him a chance to replicate at the presidential level what he did at FSB International Bank,” Ezekiel said.

But if not being politically tainted is all that is needed to clinch his ticket, then he should go ahead to book his presidential campaign open bus.

Peter Obi: Sellable but a Hard to Buy

Is social media sympathy and the need to answer the Igbo Question are that are needed to win the PDP presidential ticket and also win the presidential election proper, then former Governor Peter Obi would have no problem achieving the two. Across the two parties, he is the leading aspirant of Igbo extraction. He has the experience, having served as two-term governor of Anambra State as well as being former managing director and chief executive officer of Fidelity Bank. Above all, he has no political or corporate scandal hanging around his neck.

For a nation so diminished by corruption in public service and outright stealing of the commonwealth, Obi’s spartan approach to life and frugal management of scarce resources have endeared him to a section of the populace. Many believe if he becomes president, he would block loopholes and also stop wastage in government. His records in Anambra State speak for themselves and even the man who came after him, Willie Obiano, could barely match him. In a nutshell, Obi arguably has all the credentials to make a good president.

But that is as far as it goes. Obi does not have the national appeal and while many believe he is wealthy; it is debatable if he has the deep pockets needed to run a successful presidential campaign in an environment like this. And above all, many political realists also opine that he might not be willing to ‘play the game’. This means he might not be willing to spend money on some unconventional things needed to win the race.

Since he made his way to the House of Representatives in 2003, Aminu Waziri Tambuwal, former speaker of the House of Representatives and current governor of Sokoto State, has not looked back in his political journey. And it was not surprising that he was one of the very first northerners that picked the Expression of Interest as well as nomination forms of the opposition People’s Democratic Party, PDP. This was despite strong case for zoning of the ticket to the south by top members of the party from the South.

The House under Tambuwal practically became the unofficial opposition to the Presidency and it even got to the head when he declared that the body language of President Goodluck Jonathan encouraged corruption. On October 28, 2014, Tambuwal finally decamped to the newly formed opposition party, All Progressives Congress, APC, and April 11, 2015 he was elected the governor of Sokoto State.

Tambuwal is on his second and final term as governor and that is why he wants to step up and become the president.

He had a very turbulent reign as Senate President and a combination of federal might and local conspiracy ensured he didn’t return to the Senate in 2019. But he is back on the political beat as he is one of the serious contenders for the presidential ticket of the PDP.

Saraki no doubt has the national appeal and those who know him closely say he is a very consummate administrator. His tenure as Senate President can only be compared with that of David Mark in terms of effectiveness not been a lackey of the executive. However, he has corruption questions around him. Is he really corrupt? This will be a big issues as he continues his campaign across Nigeria.