Liverpool produced a convincing performance to defeat Villarreal 2-0 in the first leg of their Champions League semi-final at Anfield.

After a goalless first half, Pervis Estupinan’s 53rd-minute own goal brought the breakthrough before Sadio Mane added a second just two minutes later to hammer home the advantage.

It was thoroughly deserved with Unai Emery’s side struggling to contain Liverpool throughout and Jurgen Klopp will be confident of reaching another Champions League final.

Man of the match: Thiago.

Liverpool had too much for Villarreal

Liverpool attacked from the outset with the best chance of the opening 45 minutes falling to Mane early on. He could only head wide from Mohamed Salah’s cross.

With Villarreal defending deep, it required pressing and patience, Luis Diaz harrying the opposition and Thiago setting the tempo with his ever-impressive passing.

Ideas exhausted towards the end of the half, Thiago let fly from distance and smacked the post. It was as close as Liverpool came before the break with Villarreal holding firm.

Still pushing, there was brief excitement early in the second half when Fabinho put the ball into the back of the net from close range but Virgil van Dijk was offside in the build-up.

But an expectant Anfield did not have to wait much longer.

Liverpool made three changes from the weekend with Luis Diaz, Ibrahim Konate and Jordan Henderson recalled to the side.

The breakthrough goal was an ugly one when it came, Jordan Henderson’s right-wing cross looping beyond a flailing Geronimo Rulli after deflecting off the foot of Estupinan.

That appeared to break Villarreal’s resolve because within moments Mane had prodded the ball into the net from close range when put through by the enterprising Salah.

There were further half chances with the impressive Diaz having an effort deflected wide but the game was played out without further incident, Alisson untested and the home side’s superiority clear.

The Villarreal supporters, clad in yellow, had been a colourful addition to the city, enjoying their trip to Liverpool – and the semi-finals. But there was little to cheer them upon kick-off.

This Liverpool team just looks too good. Who can stop them now?

Man of the match: Thiago 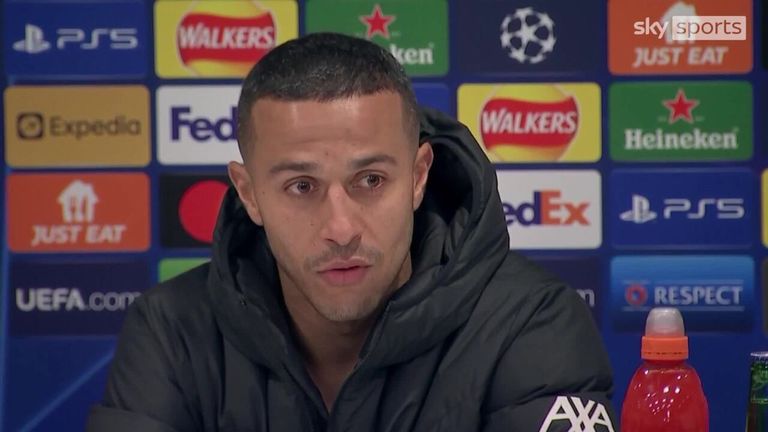 Make no mistake, Liverpool were superior throughout. But it did not feel like a coincidence that the opening goal of the game came after a trademark drop of the shoulder from their brilliant midfielder. Thiago eluded his marker, quickening the attack. The goal followed.

He had served notice late in the first half with his rasping shot from distance that arrowed its way towards the corner only to bounce away off the angle of post and bar. Thiago oozes quality and that quality was just too much for Villarreal on the night.

The temptation was to think that it was just a matter of time, that is how it felt. But patience is only rewarded if the team is continuing to probe for weaknesses. “It is not just about patience, it is about figuring out the gaps,” said Thiago afterwards. He finds them.

Klopp: It is only half time

Despite having won the first leg 2-0 against Villarreal, Liverpool manager Jurgen Klopp says his side still have work to do if they’re to reach the Champions League final

Speaking afterwards, Klopp was pleased with the performance of his players. “The way we played, the way we defended very well, the way we attacked very well. We had to score goals. It was clear we had to keep going.

“Villarreal, in one moment, when they can get out of the press, they are immediately a threat. If we don’t win the ball there, we are in between everything. We did that well most of the time.”

His mood was anything but triumphant. There were no fist-pump celebrations in front of the Kop at the final whistle, aware that there is another 90 minutes in Spain to come.

“Two-nil on aggregate but it is half time. No more, no less.

“Nothing has happened yet. If you play a game and are 2-0 at half time, you have to be 100 per cent on alert. We know we will go there and it will be a tricky atmosphere for us. If they beat us 2-0 over there and go to the final they deserve it.

Liverpool’s hectic schedule continues as they travel to Newcastle for the lunchtime kick-off in the Premier League on Saturday, knowing they cannot afford to slip up if they are to catch Manchester City.

The return leg of this Champions League semi-final takes place on Tuesday evening.