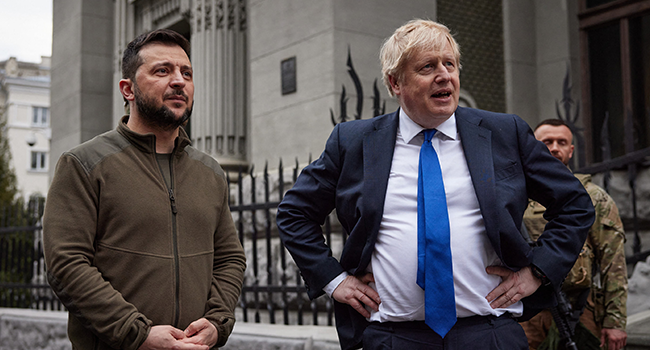 “What Putin has done in places like Bucha and Irpin is war crimes that have permanently polluted his reputation and the reputation of his government,” Johnson said, standing next to Ukrainian President Volodymyr Zelensky.

Johnson became the latest European leader to visit Kyiv this weekend after the bodies were discovered in several towns from where the Russian army retreated.

Johnson praised Ukraine for “defying odds” and rebuffing a Russian offensive on Kyiv.

“The Russians believed Ukraine could be engulfed in a matter of days and that Kyiv would falls in hours to their armies,” he said, referring to Western intelligence.

“How wrong they were.”

The Ukrainian people have “shown the courage of a lion”, he added.

“The world has found new heros and those heroes are the people of Ukraine.”

Zelensky called on the West to follow the UK in providing military aide to Ukraine and imposing sanctions on Russia.

“Other Western democratic countries should follow the UK’s example,” Zelensky said after talks with Johnson.

“It is because of President (Volodymyr) Zelensky’s resolute leadership and the invincible heroism and courage of the Ukrainian people that (Vladimir) Putin’s monstrous aims are being thwarted,” Johnson said after meeting Zelensky, according to a Downing Street statement.

That is on top of UK aid announced Friday of more Starstreak anti-aircraft missiles and another 800 anti-tank missiles, along with “loitering” drones for “precision strikes” against the Russians.

As world powers held a fundraising round for Ukraine, Johnson also promised an extra $500 million via the World Bank.

Johnson said it had been a “privilege” to meet Zelensky in person on his surprise visit, which was not pre-announced in London.

“Ukraine has defied the odds and pushed back Russian forces from the gates of Kyiv, achieving the greatest feat of arms of the 21st century,” he said.

“I made clear today that the United Kingdom stands unwaveringly with them in this ongoing fight, and we are in it for the long run.”