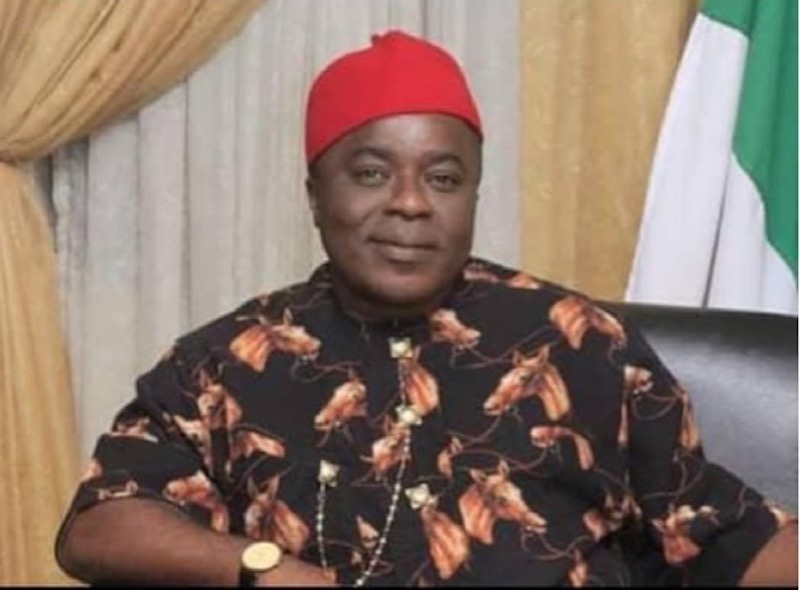 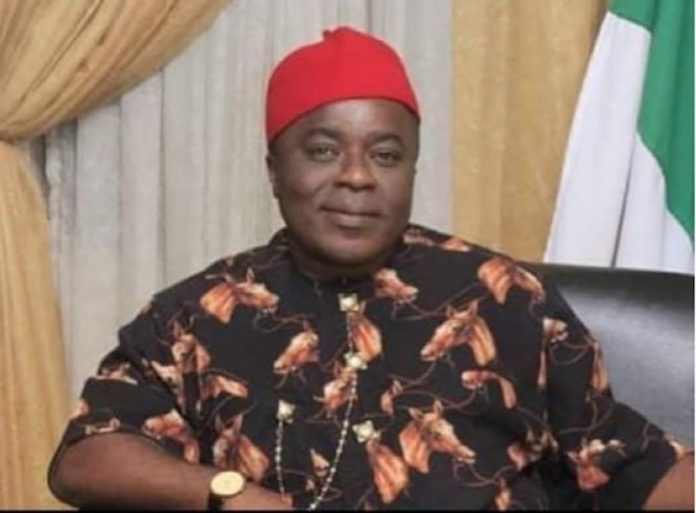 Former members of the Governor Okezie Ikpeazu Administration, led by Kingsley Megwara, accuse the government of squandermania, prebendalism, profligacy, and deliberate leakages, which has resulted in workers and pensioners living in penury with a debt peonage that will take years to recover. Nduka Nwosu writes

Yes, it was George Orwell who reminded us all animals are equal by creation and possession of certain endowments from nature. Beyond that, some animals are more equal than the others. Nowhere is this more demonstrable than in Abia State where the animals in Governor Okezie Ikpeazu’s zoo feed fat and better than the pensioners he is starving to death.

While Mr. Dave Umahi of Ebonyi State has hosted President Muhammadu Buhari twice in his incarnation as governor, showcasing his wide range of infrastructure projects, Ikpeazu has nothing significant to offer, except for a charade of poorly defined and laughable projects with the social media making a jest of him, the Charley Chaplain of his age, his brilliance in the classroom notwithstanding. Names can be brutal to the soul even as wines.

What is the source of revenue that has elevated Ikpeazu to an African big man? Does his total package as a governor provide enough to pick the bills for private jets and a lifestyle befitting that of the richest man in the world? Governor Peter Obi preferred Economy Class and a life of frugality just to make a difference for Anambrarians. He did and the track record follows him. He saved hugely, invested hugely for Anambra State. Peter Obi’s success is Ikpeazu’s nightmare. Abia is groaning in a debt overhang.

Megwara who was Ikpeazu’s image maker and campaign manager offers all the details while holding back what he feels should not be exposed to the public until the time is ripe. His anger springs from the fact that he personally assured the pensioners that this governor would do the needful in ensuring their social welfare and salaries were met with a sense of urgency.

The opposite is the case. It is like the Biblical statement attributed to Solomon’s son, King Rehoboam who promised Israel an iron fist rule worse than that of his father, rejecting the advice of Elders. Does Ikpeazu listen to the Elders of Abia State? Megwara answers in the negative.

Ikpeazu, he laments, owed pensioners nine months in 2019. That was not redeemed but left to be carried forward. In August 2021 only a quarter of a one-month salary was paid. The news from the grapevine is that pension money has been put together for the settlement of delegates who would be voting for Ikpeazu’s candidates during the coming state congress.

Megwara narrates a personal experience: “I met with some of the pensioners a few days ago and wept bitterly. It is very embarrassing to me because I had helped to assemble over 400 of them before the 2015 elections, to be addressed by Ikpeazu in Umuahia. I feel very betrayed that their conditions remain the same. We have sadly lost many of them since 2015. Some of us staked our credibility for this administration. We must ensure that the next governor must not repeat the mistakes that plague this administration. No amount of excuses can exempt us from our statutory obligations to our people.”

Megwara adds: “Funds allocated to Abia to fight Covid were not properly accounted for. Instead, it was the collective effort of public spirited Abians including Abia professionals who built a 300-bed clinic for Covid patients at the FMC which helped in stemming the tide. Abia’s debt exposure under Ikpeazu is the worst since the founding of the state. It has thrown us into a debt peonage.

“Beyond that, it is incredibly sad that this government ignores the payment of salaries for civil servants while pensioners are languishing in their various villages.”

More befuddling is the stalled $56 million World Bank project for underground water tunnel meant to help stem flooding in Aba as well as the reconstruction of the Aba-Port Harcourt Expressway.

While John Okiyi then commissioner for Information claimed the project was on going but stalled because of the inability of the contractors to procure the Tunnel Boring Machine (TBM) which a Dubai firm was to use in digging underground channels without pulling down buildings. He said, stakeholders have agreed to adopt surface tunnelling for the Ndiegoro project, adding that the 36 months contract timeline would be met. That was 17 months ago in August 2021. The rainy season is here and the communities involved as would be beneficiaries are carrying their hearts on their palms expectedly.

There is no activity on going on site. The Ndiegoro World Bank project is a flop. Ikpeazu will leave office in 2022 without telling Abians what he did with N23 billion of the Ndiegoro project.   The Abia Flood Control project, Megwara asserts, is a tragedy  foretold, revealing all the messy details of the Ikpeazu Administration.

Steve Eks, a popular social media influencer adds: “The Ikpeazu administration has mismanaged the loan; there is no tunnel and there will be none as the perennial Aba flood will arrive in the rainy season. When Aba is flooded, all the roads recovered, would be gone”

The loan was sealed in 2017 and was meant to collect water from Ngwa, Uratta, Obohia and Port Harcourt roads. $56.4 million at official exchange rate is N23.4 billion. Many have queried why the Waterside River project was awarded to Hartland, the contractor in charge of the failed Faulks Road construction project. Why not a reputable company as Julius Berger? Dubai has lifted its Covid restrictions. Why have the machines a Saudi Arabian contractor was to deliver not arrived even after the first quarter of 2021, the due date of arrival? Did Ikpeazu programme this project to fail from the get-go?

Abia government spokesman Onyebuchi Ememanka, has made several futile attempts to sell the dummy that the project is alive. The concerned LGAs do not believe him.

Right now, no work is ongoing on site, laments Eks who insists there is no evidence that Hartland has returned money paid for non-delivery.

Has Hartland refunded the state government money paid for non-performance? What about the Letter of Scope Variation from the World Bank? Why has the Ndiegoro Flood Control Programme become a Lost cause under Ikpeazu?

Just recently an APGA chieftain Obinna Ichita who represents Aba South in the State House of Assembly, had reason to ask the hungry workers of Abia to wake up and fight for their rights. That was after joining the likes of Megwara, Steve Eks and Charles Ogbonnaya, former Commissioner for Chieftaincy and Local Government Affairs, to raise the alarm that the Ndiegoro World Bank project had collapsed under the Ikpeazu Administration.  Can a hungry and emaciated man fight a governor who has all the instruments of coercion and repression at his disposal? Hear him: “In Abia, we have a situation worse than labour exploitation. A few examples will suffice. Workers in Abia State Polytechnic are owed 34 months of salary arrears; workers in Abia State Hospital Management Board have not been paid in the last 12 months; workers in Abia State University Teaching Hospital are owed many months of salary arrears.

“Workers in Abia State University are owed many months of salary arrears.

Megwara notes that Abia’s internally generated revenue is hugely under accounted for. “IGR, which should have overshot the one-billion-naira mark, if properly audited, is below N600 million. Ikpeazu has outsourced revenue points to his cronies who make paltry returns to the state coffers,” he insists.

Ogbonnaya agrees with Megwara. In a recent media interview, Ogbonnaya said he had enough information that could ruffle the state government and open a can of worms.  He told a media house that when he was in office, he was comfortably paying salaries and pension of Council workers with N2 billion and occasionally a minimum of N800 million allocated to his ministry.

“How come now that they are receiving N2 billion monthly, they are not paying salaries? They cannot pay pension. Why are they paying half salaries?” He queried, asking the Ikpeazu government to come clean because he has so much to talk about.

Ogbonnaya said he was open to a public debate on this issue of under-stated IGR returns. He continued: “If they say I lied, can they publish all the monies that accrued to this government in the past seven years? Let them tell us because we have the right to know.

“I have segmented what I want to say into three. In one of them I have A, B, and C. I have just opened the C part of it. I’m still holding B, and A.

“Once I open my mouth in the second segment to say what is in it, it will shake the foundations of Abia State. “

Does Megwara have plans to leave the PDP? He says he is a loyal party man. “Leave the party for who and for what? I am only committed to cleaning that which may be wrong in our party. We as party men and women are not zombies. We must always be critical of the party especially when we think we are on a wrong path through incompetent and careless leadership. We must rebuild the party in Abia State. We must earn the confidence of the electorate. When we point out incompetence, we are simply positioning the party to withstand elections all levels. What good will keeping mute do us in a general election that looks very competitive? I must frankly state that fellow party men and women share my views but are scared to come forward.  We must begin to rebuild our party to restore confidence with the electorate. The days of sweeping our concerns under the carpet are gone.”

Does he still think that the PDP has prospects in Abia state? “Absolutely, we are seeing an emergence of fresh blood into elective positions in the state. Mediocrity is gradually giving way for the emergence of very quality leaders. I am hesitant to mention some names since we are heading to our primaries. I am glad some of these guys are aware of the potholes in this administration.”

The way forward, says Megwara and Ogbonna, is for Abians to reject Professor Ikonne, Ikpeazu’s governorship candidate, the same way Ebonyi people rejected an imposed candidate from the former governor Elechi. The battle is on, on who takes the baton to succeed Ikpeazu who is accused of working with the APC to install his kinsman in case PDP disappoints him.