Ukraine’s Kalush Orchestra has made it through to the grand final of the Eurovision Song Contest.

It means Kalush Orchestra has solidified their position as favourites in the competition.

They will join countries including the UK, Germany, Italy, Spain and France in Saturday’s grand final.

Their folk-rap track Stefania has been described by the group as a tribute to the singer’s mother, but has since dedicated it to all Ukrainian matriarchs in the wake of Russia’s invasion of the country.

It comes as the Ukrainian TV commentator for the contest, Timur Miroshnychenko, has been broadcasting from a bomb shelter.

In the build-up to the competition in Turin, the band grabbed headlines when they posted videos of themselves on the streets of Kyiv with weapons as part of the Ukraine’s defence against the Russian invasion.

The group had to get special permission from the government to travel to Italy, after it required most men to stay in the country to fight.

The group’s lead singer Oleg Psyuk told Sky News in the run-up to the contest that he is focussed on winning.

“I think that the victory is important,” he said.

“It would lift the spirit of our people.” 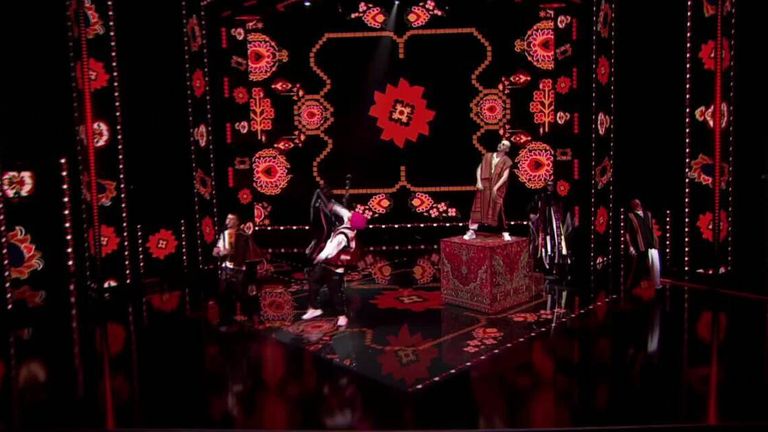 Psyuk also revealed that one band member is missing from its delegation to Turin, instead deciding to stay back in Ukraine to help defend the streets of Kyiv.

Focus will now move onto Saturday’s grand final, with Kalush Orchestra in pole position to win in Turin.

The UK is hot on their heels though, with Sam Ryder second favourite with the bookies to win.

The contest continues on Thursday with the second semi-final (8pm on BBC Three), with the main event on Saturday (8pm on BBC One).