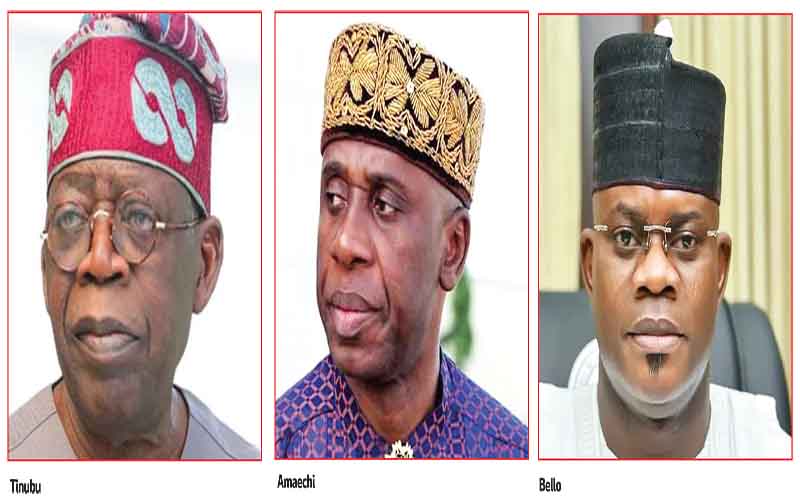 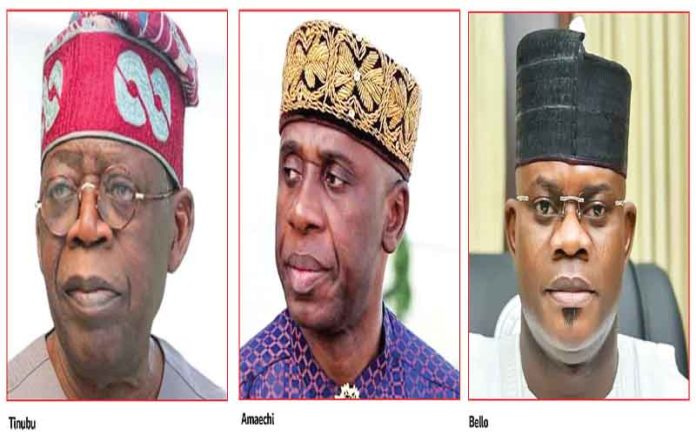 Ahead of the June 3 deadline set by the Independent National Electoral Commission for the submission of the names of candidates seeking elective offices, political gladiators have been declaring interests to pursue their presidential aspiration on the All Progressives Congress. Gboyega Akinsanmi  writes on their agenda for the people and prospects of clinching party’s nomination

With the recent inauguration of the new officers of the All Progressives Congress (APC) under the leadership of Senator Abdullahi Adamu, the new leaders of the ruling party are now faced with the task of midwifing the process of nominating candidates for the general election scheduled for February 28, 2023 and March 11, 2023. Now that the process has taken off in earnest, presidential aspirants, largely from the South, have been making formal declaration to pursue their interests on the platform of the APC and ensure that the party retains power in 2023.

On April 2, for instance, Kogi State Governor, Alhaji Yahaya made a formal presidential declaration with a compelling argument that younger generation should be allowed to lead Nigeria. On April 9, also, the Minister of Transportation, Mr. Rotimi Amaechi and Senior Pastor, Citadel Global Community Church, Pastor Tunde Bakare formally threw their hats into the presidential ring with their separate declarations in Port-Harcourt and Lagos, respectively.

After months of suspense, the Vice President, Prof. Yemi Osinbajo joined the list of aspirants, who are seeking the party’s nomination to succeed President Muhammadu Buhari in 2023. Before the flurry of formal declarations, the APC National Leader, Senator Bola Tinubu had also declared publicly after a private briefing of Buhari about his presidential aspiration, which he described as life-long ambition. Also, Ebonyi State Governor, Mr. Dave Umahi; former Abia State Governor, Senator Orji Uzor Kalu and his Imo State counterpart, Senator Rochas Okorocha have also declared their presidential bids. Apart from those who have formally declared interests to take up the mantle of leadership from May 29, 2023, Nigerians are still awaiting the likes of Ekiti State Governor, Dr. Kayode Fayemi; a former Ogun State Governor, Senator Ibikunle Amosun; the Minister of Labour and Employment, Dr. Chris Ngige and the Minister of State for Education, Prof. Emeka Nwajiuba to clear the air on their rumoured ambition.

The hope for a new Nigeria has obviously become uncertain under an administration that promised better security, healthier public institutions and stronger economy before its inauguration on May 29, 2015. The ineptitude of the ruling party has been a source of public concern, which the presidential aspirants did not sufficiently address during their declarations. Between 2015 and 2022, a review of key development indicators delineates the failure of the APC, which the Nobel Laureate, Prof. Wole Soyinka claimed, had turned Nigeria to a total disaster in an interview with CNN October 2021.

And in their declarations, the aspirants did not boldly spell out their programmes of action, which they would implement to pull Nigeria out of socio-economic doldrums and with timeline set for their implementations. In their well-celebrated article, “Nigeria Is a Failed State” published in Foreign Policy on May, 27, 2021, Founding Director, Programme on Intrastate Conflict, Kennedy School of Government, Harvard University, Prof. Robert Rotberg and a former United States Ambassador to Nigeria, Dr. John Campbell also chronicled how Nigeria slid into the darkest realm of failure under APC, citing its inability to secure its citizenry and its mind-troubling records of governance. Corruption Perception Index (CPI), annual report of Transparency International, lends more credence to the deduction of Campbell, Rotberg and Soyinka. Of the 180 countries annually measured worldwide, as the CPI revealed, Nigeria was rated 136th in 2015, 136th in 2016; 148th in 2017, 144th in 2018; 146th in 2019; 149th in 2020 and 154th in 2021.

Its rating obviously attests to the failure of the APC to make significant progress in its anti-graft war. Like the CPI, Global Terrorism Index (GTI) classified Nigeria among the first three unsafest countries globally. Since 2014, according to the GTI, Nigeria has retained this ugly rating that places it next to Afghanistan and Iraq on the rank of the world’s unsafest nations. Also, Nigeria’s rating on the Ibrahim Index for African Governance (IIAG) has never been remarkable under APC, hovering around 38th and 40th positions in the last decade.

From 2015 to date, key indicators indicate that the APC does not have well-defined policy responses to a myriad of economic challenges the country has been battling in all ramifications. In its recent report, for instance, the National Bureau of Statistics (NBS) revealed unprecedented explosion of inflation, which rose from 9.01 per cent in 2015 to 15.7 per cent in March 2022. Under APC, also, unemployment rate has exponentially risen. At the end of 2021, as shown in the NBS reports, unemployment rate stood at 33.33 per cent compared to 10.44 per cent that the ruling party inherited in 2015. From $65.43 billion in 2015, according to the NBS, public debt has increased by 46.39 per cent at the end of 2021. Currently, it stands at $95.78 billion.

Even though Buhari had promised to lift 100 million from extreme poverty just after his re-election in 2019, the country’s national poverty line had risen to 42.8 per cent as the World Bank recently revealed. By implication, the Bank claimed that inflation had pushed up to 95.1 million citizens into the cycle of abject poverty under APC, indicating grimmer future for Africa’s most populous state.

Amid all these grievous challenges to which Nigerians are demanding urgent pragmatic measures, the APC aspirants have not presented practicable reasons that project the ruling party as the party of choice in 2023. Like the case of PDP between 1999 and 2015, most of them depend on federal might for electoral victory rather than offering antidotes to issues of public concern.

This gap is evident in their declarations. Bello, for example, offered to serve on two grounds. He first argued for younger leaders who would steer Nigeria out of the woods from 2023. Already, according to him, at least 16 million youths with PVCs are waiting to support his aspiration nationwide. He also promised to replicate what he did in Kogi. But he never pointed at some remarkable works he did in Kogi that would earn him APC’s nomination. Aside, Bello’s aspiration is a breach of APC’s zoning agreement.

In his own case, Bakare defined his track records as a man of the people, as a cleric of radical orientation and as an unwavering patriot who has kept faith with the APC since its establishment in February 2013. Armed with a well-thought manifesto, Bakare promised to restore order, peace and stability to Nigeria. Obviously, however, the cleric lacks political structure that will secure him the party’s nomination except Buhari decides to throw his weight behind him. Like Bakare, Osinbajo reeled out his credentials that set him apart from other presidential aspirants. He reflected on the wealth of experience he had garnered since 2015 when he became the vice president.

On these grounds, he believes he is better prepared for the Office of the President. Without presidential approval, as analysts have argued, it is doubtful if Osinbajo can weather through the political maze of presidential primaries. While acknowledging deep-seated challenges confronting Nigeria from all fronts, Amaechi came up with a message of courage, compassion and hope. Unlike others, Amaechi is said to be among few aspirants that the Buhari’s political dynasty has pencilled down for the nomination. But his declaration did not present much hope amid deepening crises of confidence that plagued the ruling party in the last seven years.

In their drives for APC’s nomination, Okorocha and Umahi have founded their presidential quest on the justice for the South-east being the only geo-political zone that has not produced president since 1999. As genuine as this claim is, according to analysts, it is not sufficient to earn them the presidential nomination. First, it is believed, APC does not enjoy popular support in the geo-political zone as shown in their voting records in the last decade.  Obviously, as analysts have argued, this is insufficient to deny aspirants from the South-east their constitutionally guaranteed rights to govern the federation under the platform of APC.

Aspirants from the South-east seem not to have national networks and political structures they can strategically deploy to clinch the party’s nomination.  Given his political credentials, Tinubu’s preparation for the contest is getting stronger by the day. He is aggressively leveraging on his vast national networks to build political alliance and collaboration nationwide. He is indeed popular among the political class. The challenge before him is the fear that Nigerians may not accept a Muslim-Muslim ticket and the Muslim North many not likely accept a Christian from the region to be his running mate. Is the former Lagos State governor considering Muslim-Muslim ticket? This and other questions are still begging for answers.

The agenda of the aspirants are virtually empty and the majority of Nigerians are now demanding answers to entirely different questions. Amid socio-economic uncertainties that plague the nation, across all the strata, people are asking: How can we transform Nigeria to a stable nation? How can we create limitless opportunities with our little resources? How can we meaningfully engage millions of youths that practically have no means of living? How do we build a nation where every citizen can aspire to be whom he wants to be? But these are the big questions begging for empirical answers. Given its ineptitude in the last seven years, it is doubtful if Nigerians can still trust the APC or any of its presidential aspirants.