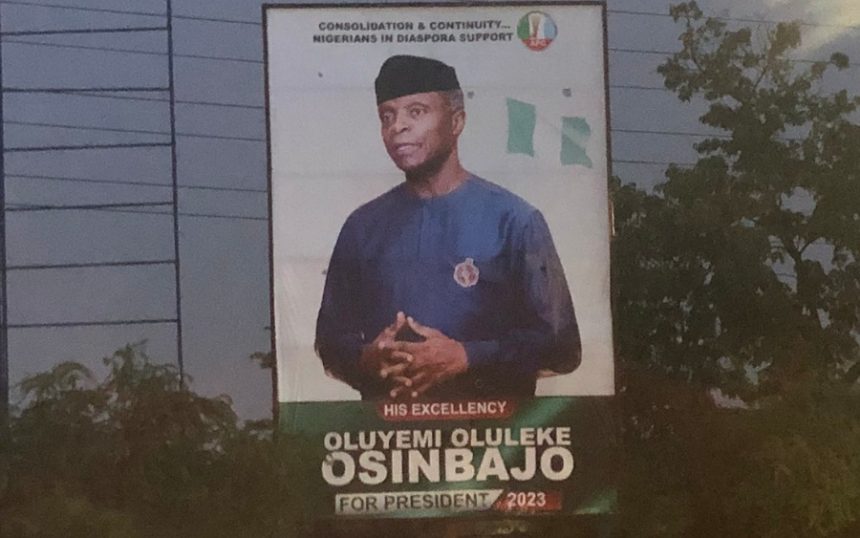 Vice President, Yemi Osinbajo who formally declared to run for the office of the Presidency has taken his campaign international with the promotion of an extra-large billboard in Accra, Ghana.

This was disclosed in a social media post on Thursday morning by a local named Kofi Darlington with the Twitter handle(@Darlington1Gh) as he posted a photo of the billboard. The billboard shows an image of the vice president with the caption, “His Excellency, Oluyemi Oluleke Osinbajo for President, 2023”.

It is not clear how many more of these billboards are present in the West African country, but one can understand the ingenuity of Osinbajo’s campaign team, given the large population of Nigerians living in Ghana.

What eyewitness is saying

Darlington said, “My Nigerians, take a moment away from Yul Edochie and Regina Daniels and come see this, this man’s so serious about your presidency that he puts a billboard in ACCRA”

My Nigerians, take a moment away from Yul Edochie and Regina Daniels and come see this, this man’s so serious about your presidency that he puts a billboard in ACCRA 😂😂😂 pic.twitter.com/Gfj9TxebaL

Darlington also gave the location of the billboard as no. 37 Achimota road, Kaukudi, in the country’s capital city, Accra.

Yes, at Kaukudi, on the 37/Achimota road😂

He said the experience he has gained so far, will be used to serve Nigeria with all sincerity and transparency.